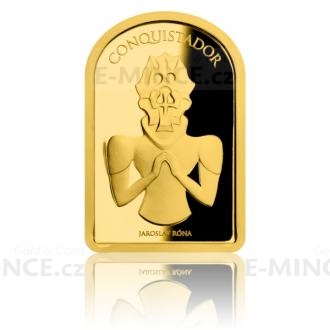 The draft of the penultimate gold medal of the Czech Mint in a series of Art for Václav Havel comes from the studio of the painter and sculptor Jaroslav Róna. Its motif is Conquistador - the Spanish conqueror of the New World - which at first glance has not a lot in common with the first Czech president. The opposite is true. After the Velvet Revolution, the gates to the whole world opened to the Czechoslovaks and Jaroslav Róna immediately took advantage of this opportunity in order to drew a new inspiration. He visited among others Mexico, whose culture captivated him. „In Mexico, I absorbed a style of some ornaments and elaborated the motive of Conquistador - the faceless conqueror in full armor. I've always been attracted to the Hispanic culture. It's very exciting for me, much more than, for example, Central European Gothic," recalls the artist on the emergence of sculptures he has chosen as a template for his commemorative medal and which would never emerged, if it was not for Václav Havel, who was a significant push for the democratization of our country.

An experienced sculptor Vladimir Oppl prepared the model of the commemorative medals according to the draft of Jaroslav Róna. A Golden metal reel used for minting of medals is unconventionally non circular, and so ideally fits into the colorful cycle. Its obverse side is dedicated to the armored conquistadores with folded hands and inhuman-looking helmet. The reverse side belongs to the Prague Crossroads, an international spiritual and cultural center residing in the Church of St. Anne. Its restoration and development was a great wish of Václav Havel and the proceeds from the sale of medals, which are based on cooperation with the Czech Mint and the Dagmar and Václav Havel Foundation VIZE 97, helps to fulfill that.

Each of 100 pieces of the original commemorative medal is hand numbered on the edge and stored in a luxurious wooden etue.