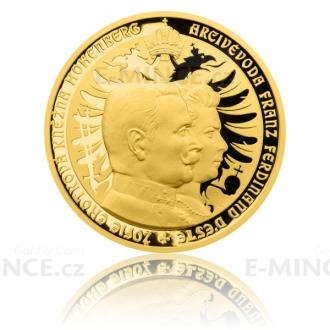 Wars have accompanied humankind since time immemorial, just the reasons, for which they are waged, change; most often they are political, religious, ideological or economical. Most of these conflicts bring principal historical changes and cause immense human suffering. Czech Mint prepared collector series History of Warcraft that commemorates major milestones of the past in an artistic form. As the first item in the series, the mint presents – in pure gold – an event which due to a coincidence changed the destiny of the entire Europe– the assassination in Sarajevo.

This year, one hundred years have passed since the moment when Franz Ferdinand d’Este, the heir presumptive to the Austro-Hungarian throne and emperor’s nephew, and his wife Sophie Chotek arrived to Sarajevo on 28 June 1914. They did not suspect it would be their last journey. The Serbian conspirators, primarily the radical ones, decided to remove the successor. However, their repeated attempts to do so failed and by coincidence, young Gavrilo Princip unexpectedly got the opportunity when the car with the successor turned by mistake into another street than planned. He did not hesitate and shot twice from the distance of one and a half metre. With the first shot he killed Ferdinand, with the other he shot dead his wife who instinctively covered her husband’s body. In several seconds he thus gave Austria an impulse to declare war on Serbia. It developed into a world conflict that resulted in sixteen million dead. Gavrilo Princip was caught and sentenced to twenty years in jail because by law he was too young for the death penalty. However, he was never released, after four years he died of exhaustion in the Terezín fortress.

The design of the unique medal was created by academic painter Karel Zeman, real master in his field. His attractive depiction of the assassination scene on the reverse as well as the effigies of Franz Ferdinand and his wife on the obverse lent the medal high aesthetic value. The first of the exceptional series – gold one-ounce medals History of Warcraft – is a splendid work of art which bears high investment potential with grace. Considering the current favourable prices of gold, the purchase will definitely pay off!