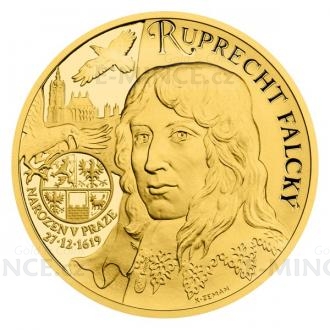 Gold one-ounce medal History of Warcraft
The tenth gold medal of the Czech Mint from the author's cycle processed by Karel Zeman entitled History of Warcraft reflects the fascinating life story of military leader Rupert of the Rhine.

The son of the "winter king" Rupert of the Rhine was born in Prague, but when he was only eleven months old, his Protestant family had to flee to Dutch exile after losing the Battle of White Mountain. Ruprecht grew into an extraordinarily intelligent, handsome, and capable man. The two-meter-high nobleman first served in the Dutch army, where he gained the reputation of a fearless warrior. In an effort to regain the Palatinate heritage, he then marched against the Holy Roman Empire and celebrated his first successes as commander of a cavalry regiment. However, he was captured and resisted Ferdinand III's offers to become his ally for three years. The Habsburg emperor released the valuable prisoner only on the condition that he never raise his weapon against him again. While the continent was ravaged by the Thirty Years' War, the dispute between parliament and King Charles I - Rupert's uncle - culminated in England. The conflict escalated into a civil war, and Rupert decided to take part in it. The king granted him the rank of cavalry general, which proved to be a happy decision. Oliver Cromwell's parliamentarians were completely taken by surprise by the Palatinate Prince's jets and in many cases crushed. Nevertheless, the war did not go well for the royalists. Rupert, whose advice Charles I persistently ignored, evaluated the fight as lost and went to France, where he became the general of Louis XIV, the "King of the Sun". Nevertheless, he went to his uncle's aid again. He became an admiral, but even his brilliant corsair attacks could not prevent the king's execution. Revenge of Rupert then plundered English ships from the Mediterranean to the Caribbean sea. Ruprecht was rested only after his family regained the Rhineland-Palatinate. The Prince of Palatinate then finally entered the service of Ferdinand III. The situation also changed in England, where Rupert's relative overtook the power again. King Charles II generously accepted his cousin and granted him the title of Duke of Cumberland. Rupert remained a soldier and excelled in naval battles with the Dutch, but he finally had time for his many peaceful interests. The fearless warrior then went down in history as a scientist, businessman, inventor and artist.

The obverse side of the medal presents a portrait of the young Rupert of the Rhine and a depiction of the Church of St. Vitus, in which the prince was baptized. A pair of ravens evoke a time full of death and suffering. One of the birds pecks into the emblem of the lands of the Czech Crown, which includes the emblems of Upper and Lower Lusatia, which our country lost as a result of the Battle of White Mountain and the ensuing war. "The reverse side of the medal is divided by the knees of the Garter Order, which Ruprecht wore. The cavalry battle at the bottom recalls the prince's achievements from the time he was commander of the cavalry. In the upper part there is the triumph at sea - admiral Rupert won as commander of one of the three English squadrons in the Battle of Lowestoft, " academic painter Karel Zeman explains.

The schedule of issuance of the gold medal is limited to only 100 pieces. Each medal is hand-numbered on the edge and supplemented with a special certificate of authenticity which contains the author's accompanying word and historical text.

Note: The author decided to change the issuance plan of the History of Warcraft cycle. The medal with the motif of the Battle of Hannibal on the river Trebia will be the eleventh one
Related products