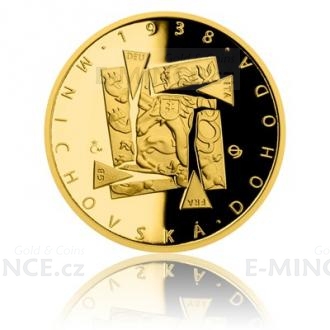 The third issue from the "Revolutionary Eights" miniseries returns to 1938. The gold coin commemorates the 80th anniversary of the Munich Agreement when our allies dictated us as defeated and broken Czechoslovakia to meet the growing demands of Hitler's Germany.

When World War I ended in 1918, French field marshal Foch said, "This is not peace. This is a truce for twenty years.” He was right. About two decades later it collapsed into another even more devastating conflict and its center was to become Czechoslovakia. The situation in the border areas of the young republic was very tight at the beginning of 1938. Recently, there was Anschluss of Austria and the German organization in Czechoslovakia was increasingly radicalized in order to break the democratic state. General mobilization was announced in September in response to the imminent threat posed by Nazi Germany, and the Czechoslovaks were ready to defend their country with weapons in their hands.

However, foreign diplomacy was set in motion. When defending against German aggression the Czechoslovak government most relied on European powers which did not deserve further global conflict. The French and the English still remembered millions of people killed in the "Great War", and therefore decided to agree with the Nazis by hook even at the expense of sacrificing their ally. Representatives of four countries - Neville Chamberlain (Great Britain), Edouard Daladier (France), Adolf Hitler (Germany) and Benito Mussolini (Italy) met in Munich on 29 September 1938 and decided that Czechoslovakia must give the borderlands inhabited mostly by German to Germany. Czechoslovak representatives were not invited to the meeting and it is no wonder that this "agreement" has entered our history as "dictation" and "betrayal". "I brought you peace," the British Prime Minister Chamberlain said after returning home. He was wrong. His future successor Winston Churchill was true and declared: "Britain and France had a choice between war and shame. They have chosen shame. They will have a war."

The medal maker MgA. Josef Oplištil expressed the events of the fateful year through the transformation of two-tailed Czech lion as two previous issues of the cycle. This time, our state symbol is smashed with four wedges that symbolize the signatories of the Munich Dictation (GB, FR, DE, IT), and is shaped as a hooked cross. Since the coins of the Czech Mint are based on a license from a foreign publisher, which is the state of Samoa, their obverse side carries these essential elements which are the national emblem, the name and the profile of Queen Elizabeth II, the nominal value of 25 DOLLARS (WST) and the year of the issue 2018. Composition of the obverse side was complemented by the text "TRUTH WINS" drawn on a ribbon hanging from a lime branch.

In the offer of the Czech Mint you will also find a wooden collector´s box decorated with thematic engraving, which contains an illustrated annex and all four eight-years as 1968, 1948, 1938 and 1918 can be stored in here.
Related products