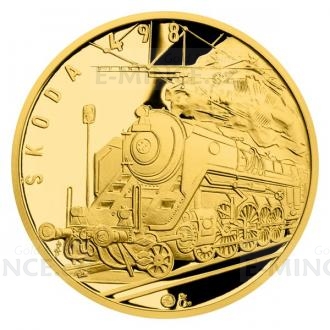 The Czech Mint pays tribute to the Škoda 498 steam locomotive, known as the Albatros by issuance of the half-ounce gold medal which is part of a free cycle of the most beautiful unrealized designs that entered in the Czech National Bank's competitions. The Czechoslovak Railways were in a difficult situation after the end of the Second World War. They lost a large number of locomotives and needed to ensure reliable operation as soon as possible. At the same time, they had to deal with the growing weight and number of express trains as well as the trend of shortening driving times. The Ministry of Railways ordered forty 486 series express locomotives from the Škoda plant in Pilsen in 1945. Before the war, these locomotives were the most powerful Czechoslovak design, but after the war they began to run out of breath. Therefore, the order reflected new design knowledge and technologies which were to contribute to higher performance and more economical operation. The design has also been modified. The boiler was placed higher, which changed the overall architecture of the machine, and the locomotive received a patriotic paint in tricolor colors. The modified series, which was given the designation 498 and nicknamed Albatros, was produced in 1946. The fact that its performance was more than sufficient is evidenced by the fact that it set the Czechoslovak speed record of a steam locomotive to 162 km / h. The operation of the Albatros was terminated due to the unstoppable motorization and electrification of the Czechoslovak Railways after thirty years in 1976. " The Albatros locomotives did a piece of honest work during their operation. Many machines have covered over two million kilometers and they belong among the most beautiful steam locomotives not only in our country, but also in the world. They are the pinnacle of design and will remain the pride of our advanced engineering, " Ing. Jindřich Rachota, expert on historic rail vehicles, says. The reverse side of the medal, whose author is Bc. Zuzana Hubená, is dominated by the Albatros with a tender that follows the railway tracks. Electric wires, which contributed to the inevitable extinction of steam traction, emerge from the cloud of smoke rising from the chimney. The inscription presents the manufacturer and the ŠKODA 498 type designation. The reverse side is then fullfilled with a detail of the locomotive wheel surrounded by the text CZECH REPUBLIC.

The medal is published in a load of only 99 pieces. Each piece is hand-numbered on the edge.