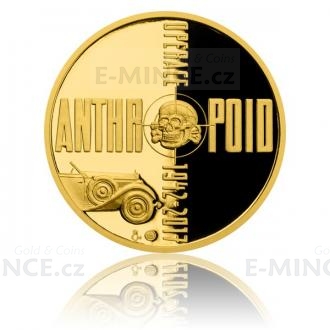 In 2017, 75 years has passed since Operation Anthropoid - the most prominent anti-Nazi action during the Second World War. The half-ounce commemorative medal from the Czech Mint made of pure gold pays homage to the heroism of Czechoslovak paratroopers and their helpers from the Protectorate.

SS-Obergruppenführer Reinhard Heydrich began his career representing the Reich Protector by declaration martial law, executing hundreds of Czech patriots and expelling thousands of others to concentration camps. The "Executer of the Czech Nation" soon became proud of eliminating all protests. However, he was soon to be convinced otherwise. The difficult task of halting the tyranny fell on Jozef Gabčík and Jan Kubiš, paratroopers in British exile. The Slovak and Czech, great friends, were planted in the occupied country. After months of preparation, they took the opportunity and successfully attacked Heydrich while he passed in his limousine through Prague. They managed to escape and with other paratroopers they hid in the Church of St. Cyril and Methodius, where they were betrayed by their own. After a powerful struggle, they chose death rather than to fall into the hands of the enemy. Nazi cruelty, however, was not over - there was another wave of reprisals and senseless murder, and the world's response soon followed. The universal sentence of Nazi crimes committed against the Czech people eventually led to the invalidation of the shameful Munich Agreement.

The gold medal is a part of the free cycle, which represents the most beautiful unrealized proposals registered in the Czech National Bank coin contests. Luboš Charvát became its author. "Do not give in place where Kubis throws a grenade, I thought. The man is seduced by the movies, ", says an expert medal maker. The obverse side is devoted to the fate of Reinhard Heydrich - dominated by the insignia SS ("totenkopf", a skull with crossbones) centered by fibre cross which translates into the inscriptions ANTHROPOID OPERATION, 1942-2017. The scene is completed by the front part of the car that brought the protector to death. The reverse side then belongs to the fate of the assassins. Its cross composition follows the obverse side - it consists of a paratrooper´s badge, the names JAN KUBIŠ and JOZEF GABČÍK and five pistol charges. The final part of the puzzle is completed with the wall of the church damaged by the shooting, where the paratroopers hid.

An illustrated Certificate of Authenticity that describes the course of Anthropoid, what preceded it and what followed, forms an integral part of each medal. The issue is limited to only 99 pieces hand numbered on the edge!