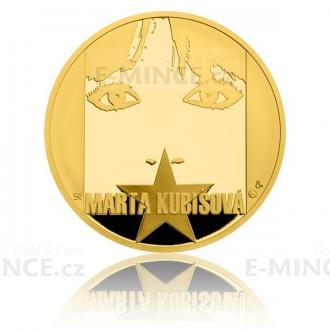 Marta Kubisova is the penultimate personality of the Music Hall of Fame, giving tribute to the half-ounce gold commemorative medal from the Nightingale cycle. The Czech Mint remembers her not only as a singer, but also as a fighter against the totalitarian regime.

Marta Kubisova's personality combines two features that go hand in hand with artistic professionalism and integrity of personality. Although she was an unbeatable music star at the end of the 1960s, a triple Golden Nightingale, and she enjoyed sexual status among men, she gave up everything in the name of truth, justice, and freedom. She was only 27 years old. The Communist regime prevented her from acting, systematically trying to destroy her life, but it could not silence her unmistakable voice. She became a signatory and Charter 77 spokesperson, and thanks to this she experienced a comeback after the Velvet Revolution, which surprised even the world's greatest singers. We still appreciate that she always had her own truth and self-esteem, This is evidenced by the fact that she has become a knight of the Order of Honorary Legion, which is the highest French national award she could receive as a recognized moral authority. Marta Kubisova, who divides her career first and second, decided to say goodbye to the fans on the occasion of her 75th birthday, when this commemorative medal comes out.

An expert medal and portrait maker MgA. Martin Dasek was the author of the golden commemorative mintage. The obverse side of the medal is dominated by a singer's face drawn out in rough outline. Her mouth is covered by a five-pointed star symbolizing the oppression of the communist regime. The composition of the obverse side is complemented by the name MARTA KUBIŠOVÁ. The reverse side is then devoted to the text of song called "Prayer for Martha". This became the protest song of Czechoslovakia occupied by the Warsaw Pact troops in 1968, and which was the beginning of the end of the singer´s career. The text of the song is covered by four numbers - 66, 68, 69 and 70. The first three represent the victories of the Golden Nightingale, the fourth is again covered with a five-pointed star and symbolizes the ban on public appearances since 1970.

As soon as the first 100 numbered pieces of gold half-ounce medals are sold out, the remaining 200 pieces of issue will be available to purchase. You can store the complete collection of Golden Nightingale in the collector's album which you can also find on offer at the Czech Mint.