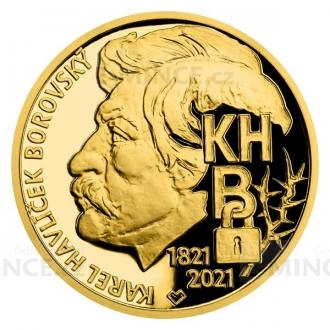 The half-ounce gold medal of the Czech Mint, which is part of a free cycle of the most beautiful unrealised designs entered into the Czech National Bank's competitions, commemorates the turbulent life of Karel Havlíček Borovský, 200 years after his birth.

The writer, poet and journalist, who became the founder of Czech political journalism, did not spare criticism, parody and satire in his work. No one could be sure before the nimble tongue and sharp pen of Karel Havlíček Borovský. The nation loved its patriotic awakener, but the authorities could not stand him. Therefore, the intrepid author of offensive articles stood trial twice. Although he was acquitted on the basis of his own brilliant defence, as an incorrigible rebel he was sent into exile in the Tyrolean town of Brixen, which was arranged by the despotic minister Bach himself. Havlíček's brave struggle against Austrian absolutism, which resulted in exile, became a symbol of the desire for freedom and the fight against oppression. The author of more than two thousand literary works died at the age of only 34. It is paradoxical that a man who, by means of logical arguments, tried to free reality from dogmas, myths and illusions, was soon declared a martyr and became an immortal legend.

The commemorative medal is the work of academic sculptor Michal Vitanovský. The obverse side is dominated by a charismatic portrait of Karel Havlíček Borovský in profile, which is supplemented with the journalist's name, initials and the annual years 1821-2021. The composition of obverse side is supplemented with two symbols. The padlock represents unfreedom. The thorn branch may refer to Christ's crown of thorns and express Havlíček's martyrdom, but it may also represent Havlíček as a thorn in the side of the Austrian lords. The reverse side then presents a Czech lion as a symbol of patriotism and an arrest warrant with Havlíček's germanized name and the seal of the c. and k. police.

The medal was issued in an edition of only 99 pieces. Each piece is hand-numbered on the edge.