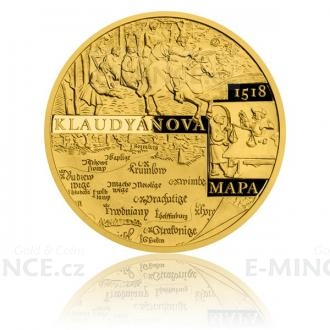 The oldest map of Bohemia and the first independently printed map of the Central European country the so-called Klaudyan map was created just 500 years ago in 1518. The anniversary is commemorated by the half-ounce gold medal of the Czech Mint, which is part of free cycle of the most beautiful unrealized designs submitted to the Czech National Bank competitions.

A versatile scholar named Nicholas lived in Mladá Boleslav at the beginning of the 16th century. For his body defect he was nicknamed Klaudyan, because claudianus means lame in Latin. He initially worked as a successful physician and pharmacist, but then he put all his energy into the printing industry, which allowed a rapid and massive spread of critical thoughts. Klaudyan created his manuscript of his map as early as 1516, but had to wait for the decision of the Nuremberg Council to judge whether the content of the work contradicts Catholic doctrine. It was not an ordinary map, but an allegorical sheet enriched by the periodic reflection of the relations prevailing in the Czech lands, seen by protestant eyes. The map itself, the approximate scale of which is 1: 685,000, depicts Bohemia and Kladsko and was intended as a tool for pilgrims traveling to Rome. The geographic plan, however, formed only a third of the document. Most of the print is dominated by sophisticated painting. It presents the King Louis Jagiellon, the emblems of his lands, a list of types of justice, moralizing illustrations supplemented by scriptures, and a series of characters of the highest provincial dignitaries and cities. The graphics of a wagon fitted with crazed passengers who are impressed in both directions symbolizes a disturbed political and religious climate. Another wagon, this time raided by the robber, points to bad security.

Both sides of the commemorative medal, which comes from the studio of Luboš Charvat, present a collage composed of various motifs of historical print. A cut-out of the southern part of the map, for example, is captured by the town of Krumlov or Rožmberk Castle, the pyramid of justice is guarded by a two-tailed czech lion, and among the characters across the layers of the 16th century company there are robber raiders, merchants and the king.

The emission load counts only 99 pieces of gold medals, each of which is manually numbered on the edge. An integral part of the issue is an illustrated certificate of authenticity that tells the story of a historical map.
Related products