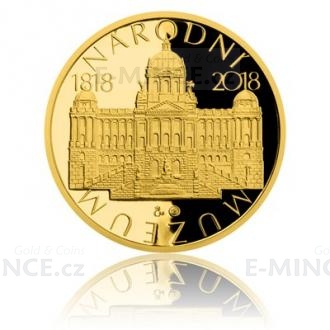 The National Museum has accumulated millions of unique artefacts from a number of disciplines including numismatics during 200 years of its existence. The most recent rare subject connected with the most important czech museum institution is the half-ounce gold medal, which is part of the free cycle of the Czech Mint dedicated to the most beautiful unrealized designs submitted to the Czech National Bank competitions.

When the national revival is said, few people recall the nobility. Nevertheless, they were representatives of the patriotic conscious czech aristocracy, whom we owe to the establishment of the National Museum. The chief initiator of the Institute's idea, which would deepen cognition and spread knowledge, was the world-renowned scholar in the field of paleontology named Kaspar Maria the Earl of Sternberk. The museum was founded on April 15, 1818, when the czech counts invited all patriots and supporters of the sciences to build museum collections. The nobility did not stay with words at the time. It gave a lead and devoted its extensive collections including libraries and mineralogical exhibits to the new museum. It was decided to build a new representative residence when the aristocratic palaces became small to the museum funds. The neo-renaissance building on Wenceslas Square became the main symbol of the institution in 1891, which brings the knowledge of mineralogy, geology, paleontology, botany, zoology, anthropology, prehistory, archeology, ethnography, numismatics, ethnography, musicology, libraries and many others, for which the National Museum can thank Frantisek Palacky as the "father of the nation".

The art design of the commemorative medal was made by the medal maker MgA. Jakub Orava, who won the second place in the competition of the Czech National Bank for "perfect depiction of the historic building and dominant Czech lion”. The composition of the medal is then complemented by the expositions administered by the National Museum.

Each of the only 99 medals is hand-numbered on the premiter and complemented by a special certificate of authenticity that tells the story of the National Museum.