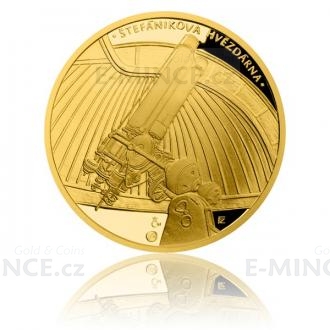 We celebrate the 100th anniversary of the foundation of czech astronomical society in 2017. As a reminder of this round jubilee, the Czech Mint dedicates to all astronomers a commemorative medal drawn from one half of the Trojan ounce of pure gold, which is part of free cycle of the most beautiful unrealized designs submitted to the Czech National Bank competitions.

Our country has been a land of promise to the astronomers. It is enough to remember Rudolfinum at Prague at the turn of the 16th and 17th centuries, Tycho Brah and Johannes Kepler. The most important chapter of Czech astronomy, however, began to be written in the 19th century, when a number of prominent personalities were interested in the sky. Among them was, for example, the author Jan Neruda, whose "Cosmic songs" made astronomy more popular, however, above all, it is necessary to mention the name of baron Arthur Kraus. The man who opened the first Czech, publicly accessible observatory in Pardubice in 1912 tried to bring his passion to the public at large, and he therefore initiated the formation of an interest-based association, followed by a few years of hard work of enthusiasts, culminating on December 8, 1917, when they established a national astronomical association, despite the unfavorable Austrian-Hungarian authorities. A stormy century full of radical changes and conflicts followed, but the czech astronomical society conscientiously fulfilled its purpose. It supported the observation of celestial bodies, stimulated the construction of a number of observatories. Its members popularized astronomy through lectures, books and other media. It is a link between professional and amateur astronomers, conveying to the lay people the latest scientific knowledge and educating young talents that spread the reputation of czech astrology around the world even 100 years since its founding.

The medal, made by the academic sculptor Zbyněk Fojtů, was appreciated by the CNB expert committee for "a detailed depiction of König's double astrograph in the main dome of the Petřín Observatory on the obverse side and the rotating sketch of the sky on the reverse side". The inscriptions on both sides of the medal present: ŠTEFÁNIK OBSERVATION - FOUNDATION OF CZECH ASTRONOMIC COMPANY - 1917 - 2017.

The cost of half-ounce gold medal is only 99 pieces - each of them is manually numbered on the edge and accompanied by an illustrated certificate of authenticity, which commemorates the importance of the czech observatory association.
Related products