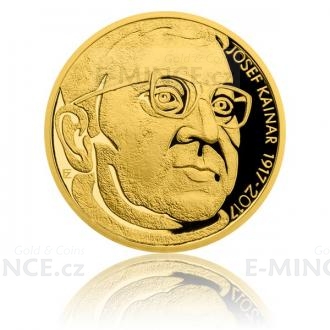 Josef Kainar was born in 1917 and when he was less than 17 years old he attempted suicide. Fortunately, he failed and became one of the most versatile Czechoslovak poets of the 20th century. The half-ounce gold medal of the Czech Mint comes on the occasion of the 100th anniversary of his birth.

The style of Josef Kainar underwent many changes. He began as a student influenced by existentialism and sometimes he resorted to skepticism in his attempt to portray a real image of the world. His ironic view of society was also reflected in absurd dramatic works. But soon he was thrown down by the atmosphere after february of 1948 - in his festive verses he showed true enthusiasm for building and inspiration by folk songs. In his optimistic spirit, he played his playful creation for children. Over time, however, he began to lose illusion and set out on a path full of dark blues atmosphere and bitter resignation. Where would he go on? We will never know - he suffered a heart attack when he was only 54...

The academic sculptor Zbyněk Fojtů became the author of the gold medal from the free cycle of the Czech Mint, which is dedicated to the most beautiful unrealized designs submitted to the Czech National Bank competition. His art concept impressed the expert committee so much so that he was given second place. The committee was particularly impressed by the "extraordinarily beautiful portrait" of Josef Kainar in characteristic dioptric glasses on the obverse side. The reverse side belongs to the artist's versatile talent - the composition consists of a number of Kainar's professions (POET, LYRICIST, JOURNALIST, MUSICIAN ...) and poetry collections, the picture of a violin and guitar he played, and the legendary poem "Cutting a Little Boy´s Hair".

The limited edition counts only 99 pieces of numbered medals. Each is accompanied by an illustrated certificate of authenticity that tells the poet's life story.