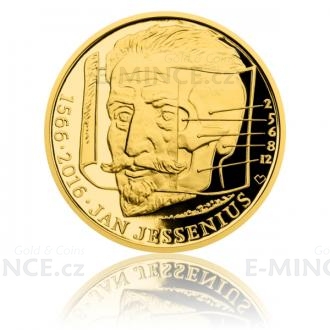 A series of half-ounce gold medals inspired by the most beautiful unrealized proposals from a competitions of the Czech National Bank represents a significant Czechoslovak physician, philosopher and politician Jan Jessenius, who was born 450 years ago.

Nature attracted Jessenius from an early age, when he was wandered with his grandmother, the herbalist, collecting plants. His curiosity led him to study the philosophy and later medicine as well, which charmed him. His talent and hard work soon fired him into the highest social circles. He became the dean and later the rector of university teaching, he served in the court of the Elector of Saxony and Emperor Rudolf II. and Matthias. He devoted himself to autopsies, to which he regarded as a unique tool of education, and carried out the first public autopsy in the Czech lands. Hand in hand with his prestigious position also came political connections. They, however, became fatal for him. He became involved in the Czech uprising, where all the forces supported the Protestant revolt. When the rebellion vas over after the Battle on the White Mountain, Jessenius was designated as its leader. As one of the 27 rebellious Czech lords was sentenced to death on June 21, 1621 and was beheaded on the Old Town Square.

For the realization of these commemorative medals has the Czech Mint chosen an art design of an academic sculptor and expert on historical topics Michal Vitanovský. He attracted the professional jury of the Czech National Bank by combining a witty portrait of Jan Jessenius, with a sheet of his studies of the human skull. The scene bearing the schematic numeric labels is followed with the reverse side of the medal, which presents a study of an autopsy of the human body and a set of historical surgical instruments.

With eachof the 99 medals hand numbered, comes an illustrated certificate of authenticity, telling the story of the rise and fall of Jan Jessenius.