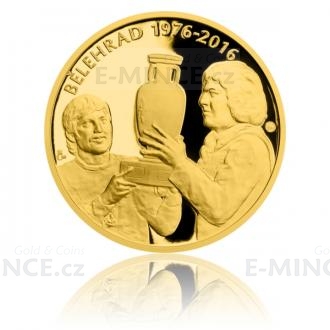 The cooperation between the Czech Mint and the Czechoslovak football legends does not end with the same name of the series of the commemorative coins! Another joint project, which is based on the occasion of the 40th anniversary of Czechoslovak victory at the football European Championship 1976, is a commemorative medal stamped from one half troy ounce of pure gold.

It is interesting, that the plaster models of the medals were presented to the public on the day of an exhibition of a friendly match between the teams of the Czech Mint and the assembly made up of the football Internationals. We are not ashamed to admit that we lost 8:3 - after all, in the assembly of opponents were several stars, who 40 years ago in Belgrade, Yugoslavia surprised the German players and the entire football world!

The author of the artistic design of the commemorative medal is an experienced medal maker MgA. Martin Dašek, who has a considerable practice of modeling the footballers. The obverse side is based on a period photographs, on which the striker Zdeněk Nehoda, along with the defender Karol Dobiaš, triumphantly lift the championship trophy. The snapshot is accompanied by the text BELGRADE 1976-2016. The reverse side of the medal features a soccer ball that overlaps two symbols - the emblem of the Czechoslovak Socialist Republic (the lion with a star on an Oakenshield) which adorned the jerseys of our national team and the national team logo of DFB with an eagle in the middle. The composition is closed by a description CZECHOSLOVAK FOOTBALL TEAM - THE CHAMPIONS OF EUROPE.

The medals are hand-numbered around the edge, and a part of each is a numbered certificate featuring photographs and autographs of the selected members of the legendary football team!

Do not hesitate - one of only 100 copies can be yours!