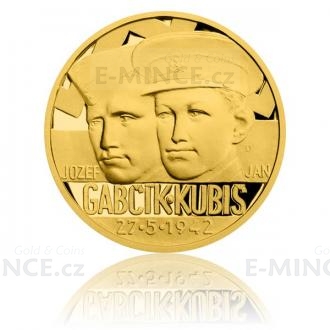 In the chronicle of Czechoslovak courage called National Heroes, the Czech Mint visited the chapter devoted to the Second World War. The second gold ducat from the collector's cycle belongs to Jozef Gabčík and Jan Kubiš - paratroopers who ended the tyranny of Reinhard Heydrich.

Gabčík and Kubiš, Slovak and Czech, were not just brothers in battle but also great friends. They met for the first time in June 1939 in the camp of Czechoslovak volunteers in Poland, from where they escaped from their Nazi-dominated homeland. They immediately became friends, though they could not be different at first glance - Gabčík was quick-tempered and impulsive, Kubiš thoughtful and calm. However, similar fates united them - they came from families of small farmers, they built a military career and, above all, did not agree with the demise of a common state and decided to do something about it. They came from Poland to France. After the German invasion they were distinguished in retreating battles and ended up in England, where they enrolled in special operations and were selected to perform the paratroopers Anthropoid Operation. Their task, which they met on May 27, 1942, was to remove the representing Reich protector of the Protectorate of Bohemia and Moravia. However, the story of friends for life and death had no happy ending - they were betrayed and their last battle was brought down on June 18, 1942 in the Church of St. Cyril and Methodius in Prague.They died bravely rather than fall into the hands of the enemy.

"The obverse side is dominated by a double portrait of the paratroopers. The fractured construction in the space above their heads is similar to the hook cross and resembles the climate prevailing in the Protectorate. The polished strip symbolizes the light and forms the pedestal of both heroes, " says the academic sculptore and author of the ducat Jiří Dostál. He supplemented the composition of the obverse side by the names of both paratroopers and the date they made a memorable attack. The reverse side then bears a symbolic composition consisting of a parachute and a target covered with texts ANTHROPOID OPERATION and MILITARY ATTACK ON HEYDRICH.

Ducat is stored in a special package which contains the professional treatise from renowned historian PhDr. Petr Koura, Ph.D., an expert on Czech history and a guarantee of the entire National Heroes project.