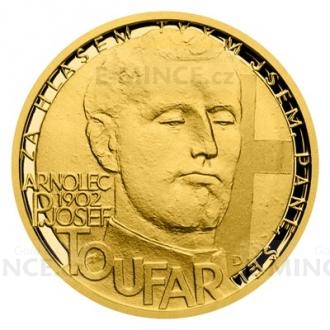 When the Communist Party consolidated its power in Czechoslovakia after February 1948, one of its strikes was directed against the Roman Catholic Church, which the Communists considered an ideological enemy. They gradually interned the bishops, imprisoned a number of priests, abolished religious orders and imprisoned their members in special camps. They portrayed the church as a hostile place and an headquaters of Western intelligence services, and last but not least, they hung several priests because of fabricated accusations. The event that took place on December 11, 1949 in the village of Číhošť in the Bohemian-Moravian Highlands served as a pretext for the campaign against the Church. The cross placed on the main altar of the church moved several times. This event, which is not yet fully explained, fatally influenced the life of the popular pastor Josef Toufar. The news of what had happened during his worship spread quickly and attracted crowds of pilgrims, including the Vatican diplomat. The event began to gain a dangerous international dimension for the Communists, so they decided to discredit Toufar and the whole Church. The priest was arrested, brutally interrogated and forced to confess to the construction of the mechanism that should have moved the cross in the church in Čihošť. The ruling party wished to organize an enormous political process that would publicly reveal the spies of the "treacherous Vatican", but Toufar did not confess even despite physical violence. Torture ultimately killed a priest. The name of Josef Toufar should have been forgotten, but it has not, and hopefully the time of his beatification will come soon…

“The composition of the obverse side is dominated by a portrait of Josef Toufar inspired by a photograph, on which the pastor, with a slightly lowered eyes, leaves his native house for his first holy mass. The proof inscription shows I FOLLOWED YOUR VOICE, LORD - part of the motto that Toufar wrote down in the "blue booklet". In the background on the right side there is a cross. The inscription on the left side bears the place and year of birth of priest ARNOLEC 1902, the first name JOSEF and the letter P., which stands for his title. The surname TOUFAR, spread from shoulder to chest, symbolizes the size and strength of the hero's faith, ” academic sculptor Jiří Dostál explains. “The matt reverse side is dominated by a cross with the text 672 HOURS OF TORTURE BY THE COMMUNIST WILL TO DEATH † 1950 PRAGUE. In the background, there is an obliquely inclined cross that commemorates the event of Toufar's sermon in Čihošť. The rising wave with the text BURIED IN ČÍHOŠŤ 2015 resembles the shape of a box containing Toufar's remains that are stored in the local temple, ” the author of the ducat adds.
Related products