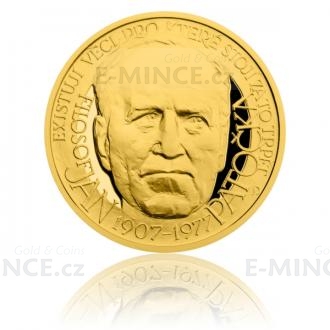 We can say without exaggeration, that Jan Patočka is the greatest modern Czech philosopher. But because he was also a fierce freedom fighter, he is entitled to the first gold ducat from collectibles series of the Czech Mint called National Heroes.

Jan Patočka was never a part of political activism. He became an activist, when Václav Havel asked him for his support of the persecuted band The Plastic People of the Universe. Their rock music was not Patočka`s cup of tea - he personally preferred Beethoven and even declared, that he can not listen to the band for more than ten minutes - but, he decided to defend them, because it was about justice. The launch of Charter 77 in the lawless country was also about justice, where Jan Patočka, along with Václav Havel and Jiří Hájek became the first spokesmen. The moral character, which Patočka, in keeping with its philosophy, imprinted into the Charter, won reaction at home and abroad. The first Western politician, who contacted the Charter, was the Dutch Foreign Minister Max van der Stoel. He did so precisely through Jan Patočka, to whom their meeting became fateful. He was repeatedly interrogated by the secret police, and after eleven hour undignified compulsion he was hit by a bout of stroke. His funeral in 1977  became a great manifestation of anti-communist resistance.

The author of the entire series is a leading academic sculptor Jiří Dostál and his gold ducat with Jan Patočka carries the philosophical spirit. The obverse side is dominated by a portrait emitting light, which symbolizes the moral example. Alongside the principles of light and dark on the reverse side, ancient columns are symbolized. The furrows characterize the existential thesis of three major basic movements. It also expresses Patočka`s relationship to the Greek philosophers and the remaining three elements that occur in the composition, recall that the spokesmen for the Charter 77 were always three.

Professional guarantor of the series is PhDr. Petr Koura, Ph.D., an expert on our modern history, who has created an extensive biographical text for the the issue. This and much more includes a narrative package of the ducat in the form of a book with dust jacket.