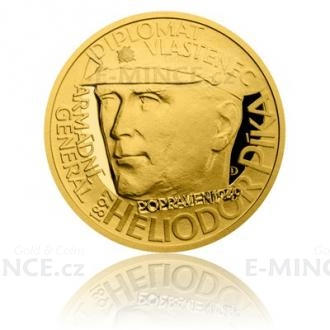 The second year of the cycle of the Czech Mint "National Heroes" was started by Bedřich Homola, who is now joined by another legionary, a hero of both world wars and a victim of the totalitarian regime. The gold ducat pays homage to Heliodor Pika.

General Heliodor Píka is known today as one of the first victims of Stalinist terror in Czechoslovakia. Somehow, however, it has been forgotten that as a legionary during the First World War he joined the struggles for an independent state of the Czechs and Slovaks and was a prominent figure of anti-Nazi resistance during the Second World War. He was a convinced patriot and democrat who dedicated his life to his homeland, and for the sake of his solid character he eventually paid the highest price. The Soviets in a fundamental man who never acted as a subordinate, but as an equal partner, saw him as the threat to their power goals. He was therefore falsely accused of military betrayal and espionage in favor of the United Kingdom, and sentenced to death in an artificial process. Then General Pike did not get bored, and he was still thinking of the good of his homeland. He wrote in a farewell letter: "I am convinced that this is not a judicial mistake, but everything is so transparent, however, it is a political murder, but I would like to bring this violent sacrifice if it serves to pacify the nation and unify it. There is no anger, hatred or vengeance, perhaps my adversaries want to use it for unity. "

"The portrait of Heliodor Pika in the general cap surrounds the proof background, which reminds the rope," explains the author of the ducat and academic sculptor Jiří Dostál. The composition of the obverse side is complemented by the inscriptions THE ARMY GENERAL HELIODOR PÍKA, 1897, DIPLOMAT and PATRIOT. The inscription EXECUTED 1949 overlaps the general's neck. "At the bottom of the reverse side on the proof background there is a linden branch with insignia on the collar of the military uniform. Above it there is a free composition of the totality symbols, which means sickle and hammer which incorporates the text MURDER BY THE NAME OF REPUBLIC known from the book of Benčík and Richter from 2006," adds the leading medal maker.

An integral part of each ducat is a spectacular packing in the form of a book that contains an essay of renowned historian and expert czech historian PhDr. Petr Koura, Ph.D. A complete series devoted to the national heroes can be stored in a practical collector´s box.
Related products