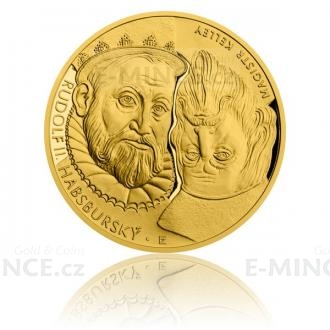 The gold coins of the Czech Mint, weighing two troy ounces, are traditionally dedicated to well-known historical couples. They have been representing reformers, artists and rulers. With the latest release, you will go to the enchanting world of alchemy. Your guide will be Emperor Rudolf II. and Master Kelley. Rudolf II. Habsburg became famous as a grand patron of magicians and mysterious scientists. It is no wonder, therefore, that the English alchemist Edward Kelley, the disciple of the famous John Dee, also visited his Prague court. The Emperor was impressed by his experiments with a youth elixir, tapping technique and metal conversion in gold and soon became his favorite. The promises of miracles ensured the magistrate's wealth, influence, and noble title. But Rudolph's patience was not infinite. When Kelley killed a court clerk in a forbidding duel, it was the last drop. The Emperor let the charlatan be imprisoned first at Krivoklatand later at Hnevin and tortured him in vain to enlist his secret. Kelley crippled  by two attempts to escape. He lost his leg and eventually he took his life. He was only 42 years old. Is it possible that he was in fact a secret agent of the English Queen Elizabeth, as legends say? The two-ounce coin is the work of the academic sculptor Zbyněk Fojtů. The relationship between the emperor and the alchemist, who has turned from contempt, is expressed on the reverse side through portraits that are upside down to one another. Rudolf must not miss a fashionable but inconvenient lace cloth, Kelley's long, thick hair. He was hiding the missing ears that were cut off in England as a punishment for notarial deeds. The obverse side is dominated by the view of Rudolfinum Prague, which was the center of Renaissance Europe. Since it is a coin issued in the foreign license of the island of Niue, the obverse side still requires the attributes of the issuer. These are the name and the portrait of Queen Elizabeth II, the nominal value of 100 DOLLARS and the year of the issue 2018. Two ounces of pure gold, two historical figures and just 200 pieces of coins!