You are here:Home»Czech & Slovak»Czech Mint 2018»Gold coin Period of George of Poděbrady - Diplomat of Peace - proof 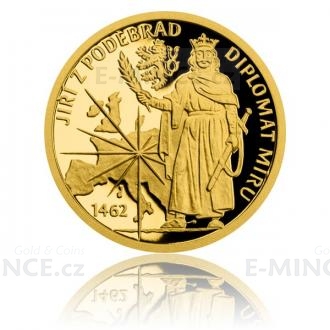 The internal political position of George of Poděbrady has no similarity in the history of our country. He successfully reigned at home as a moderate hussite not only over his co-religionists, but also over the former Catholic enemies of the Hussite wars. However, he was also unique in the field of foreign policy, which was far ahead of time and which is commemorated by the second gold coin of the Czech Mint from the Period of George of Poděbrady miniseries.

The pope was not inclined to the czech communion under both kinds, the kurie even called us an ulcer on the body of Christianity, and the Czech countries threatened diplomatic and economic isolation. King George therefore decided to set out a mission to European Catholic rulers. His wish was for all Europeans to strive for a lasting peace on the principle of national sovereignty, non-interference and dispute settlement before the International Court of Justice. Everyone should unite against a real enemy - the Turks. The co-author of the project, not unlike today's United Nations, was the Italian humanist Antonio Marini, who secretly traveled through the foreign courts for several years on behalf of George and tried to gain the individual powers for the idea of cooperation. However, the influence of the begrudging pope on the European courts was too strong, and so the whole peace project was wrecked. George never gave up and sent another legendary expedition "from Bohemia to the end of the world" - this time publicly, with the appropriate glory and considerable financial security. The expeditions were attended by Czechs and Germans, Hussites and Catholics and people from various social strata. Wherever they went, they dazzled with the selected knightly behavior and proved that we were a country of truly European significance.

The idea of a sophisticated reverse side of the coin is best represented by its author, academic sculptor Michal Vitanovsky: "The design builds on the figure of the king and the differences of gestures in his hands. He holds a peace branch in the right hand, in the other, running along the body, he has a sword. In the background there is part of a map of Europe with a linear expression of a peaceful idea - from the place where the Czech Kingdom lies. Another motive is the Czech lion." The commemorative coins of the Czech Mint are issued under the license of a foreign issuer, which is the Pacific island of Niue, and their obverse side therefore bears its necessary attributes, which are the name and portrait of the Emperor Elizabeth II, the nominal value of 5 DOLLARS (NZD), together with the year of the issue 2018. There are four gothic traces with lilies among the attributes.
Related products