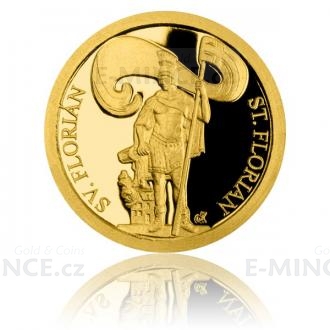 The patron is a saint, apostle or martyr who is considered to be a heavenly representative of a particular craft, occupation or activity. The best known patrons who are safely leading our steps will gradually be the new line of gold minicoins of the Czech Mint. Saint Florian is the first to come.

St. Florian is a patron of fire-related professions - firemen, smiths, chimneys, bakeries, potters and many others. His sculptures were built to protect against fires, droughts and frosts, but also floods. Iconography is usually depicted in the armor of a Roman officer with a fire-fighting vessel and a burning building. Fire and water symbolize both his profession and his martyrdom. Florian commanded a unit of Legionnaires, fire fighters. It was during the times of Emperor Diocletian, the persistent pursuer of the Christians to which Florian belonged. As he stepped up fearlessly to support the imprisoned crusaders and refused to give up Christ, he was cruelly tortured and then sentenced to death. According to one legend, he was to be burned at the border, but because he was glad that his ashes and smoke ascended to God, his prisoners tied a millstone to his neck and thrust him into the river Emza. It is said that Florian's container therefore contains not only water to extinguish fires, but also the love of extinguishing human hatred: "Where the fire burns fiery, and there is increasing sin and strife, the helper is given to us, Saint Florian."

The gifted young medal maker David Kružliak became the author of the coin dedicated to Saint Florian. The reverse side was devoted to the characteristic depiction of a patron in the uniform of an ancient soldier with a banner with a cross and a builder with a burning building. Czech-English inscription presents the saint name: ST. FLORIAN. The obverse side belongs to the attributes of Niue Island, an issuer that grants the Czech Mint a foreign license to coin its own commemorative coins. They are the name and the portrait of Queen Elizabeth II, the year of the issue 2018 and the nominal value of 5 DOLLARS (NZD).

The gold coins are placed in an attractive bilingual packaging that represents the patron as a protector. It serves as a talisman for happiness, an affordable gift and an original addition to the collection.
Related products