You are here:Home»Czech & Slovak»Czech Mint 2021»Gold»Ducat Series CR 2021 In the Footsteps of Our Ancestors - proof 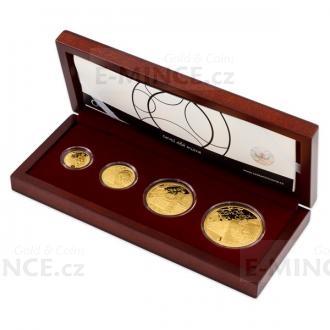 Legend says that when the people led by Father of Bohemia discovered the Promised Land rich in honey and milk, it was untouched by human hands. However, our oldest ancestors - prehistoric mammoth hunters - had called it home thirty thousand years earlier. Even at the time when classical civilizations arose and fell in the south of Europe, the Elbe basin was not deserted. It got its Latin name Bohemia after the Celtic tribe that inhabited it before succumbing to the Germanic invasions. When the time came for the nations to move, the Slavs came from the east. The Moravians built the Great Moravian Empire, which became the cradle of West Slavic culture, and the Czechs founded the Czech Principality. Their destinies then inextricably intertwined and gave rise to the lands of the Czech Crown, on whose solid foundations we stand to this day… Each of our ancestors left something behind and the following unique artifacts reveal to us how they lived and thought:

The obverse sides of the ducats present a faithful depiction of individual historical monuments, which are supplemented with period ornaments. The ceramic statue of a prehistoric woman is accompanied by cave paintings, a stone sculpture of a Celtic druid's head, a silver cross with a martyred Christ of Slavic filigree, and the figure of the chronicler Kosma, together with a medieval script. The reverse side, which is common to all four mintages, is in the same spirit. The elaborated reliefs were processed by the leading medal maker Lenka Nebeská, DiS.