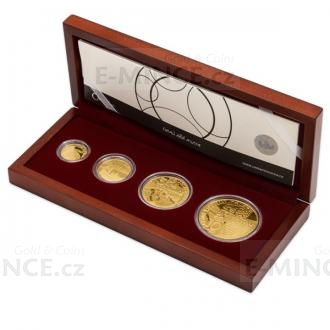 The Ducat series, which first appeared in 1997, is a traditional issue of the Czech Mint. Every year it presents purely Czech themes - such as crown jewels, old czech tales or the best of the first-republican culture. Even the year 2018 is no exception. Gold mintages produced on the occasion of the 25th anniversary of the establishment of the independent Czech Republic are devoted to the attributes that our sovereign state defines and represent inside and outside.


Ducat - CURRENCY: The currency is not just a means of exchange. It is evidence of the current economic and political situation of the state, and at the same time reflects the past of the nation.


Double Ducat - THE PRESIDENT: The president is a symbol, representative and head of state. He represents its country outside, speaks to its citizens and forms the atmosphere in society.


Five-ducat - STATE BORDERS: The boundaries that separate the state from its neighbors are not a mere line on the map. They are confronted with unique orders and cultures whose interests are often quite different.


Ten-ducat - CONSTITUTION: The basic and most important state law defines the organization of power in the country, but above all it presents the fundamental rights, values, principles, traditions and ambitions of its society.

The ducat series was made by the leading medal maker academic sculptor Zbyněk Fojtů, the teacher and the multiple winner of CNB art competitions. The reverse side is common to all four mintages and carries originally heraldic animals along with the inscriptions 2018 - 25 YEARS OF THE CZECH REPUBLIC. The obverse sides then belong to the state attributes. The currency is represented by composition inspired by ten-crown coin, while the personality of the President is represented by a collage composed of the flag, the standard and the panorama of the Prague Castle, the border of the state with the marked regions of the Czech Republic guarded by the Czech lion and the excerpt from the preamble of the Constitution lined by the Czech lion, the Moravian eagle and Silesian eagle.

The complete ducat series, stored in a luxurious wooden etui with a spectacular certificate of authenticity, is issued in a mere 100 pieces. All four ducat mintages dispose of authentic ducat specification, which means the weight and purity of the gold used in the mintage comes from the St. Wenceslas ducats, which are considered to be the highest work of the czech minting. The ducat series is also distinguished by the above-average huge number of mintages and the extraordinary quality proof, which move the traditional Czech ducats to the very top of modern coining.
Related products