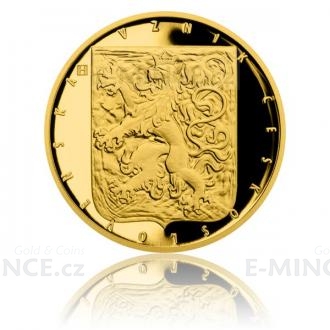 The miniseries of five golden ducats of the Czech Mint "The Origin of Czechoslovakia" was dedicated to the major events of 1918, which led to the founding of a common state of Czechs and Slovaks. The third issue commemorates the acts of the group that entered history under the title "Men of October, 28".

The National Committee representatives also decided to act in response to the demonstrations and spontaneous manifestations of patriotism that took place in the streets of Prague on October 28, 1918. All of our leading politicians were at the time of the border at the Geneva resistance meeting. The fate wanted the historic role to fall on Antonin Švehl, Alois Rašín, Jiří Stříbrný, Vavro Šrobár and František Soukup. These five politicians took the first steps to take power over the country peacefully and drafted the first law of the Republic, which means the law on the establishment of a separate state of Czechoslovakia together with the Proclamation of the National Committee. With the words: "People of Czechoslovakia! Your eternal dream has become a deed. The Czechoslovak State entered in a number of independent, free, cultural states of the world today, " began the most important speech in our modern history. Men of October, 28 foretold the glorious future and highlighted the deeds of our legionnaires. "By new acts in these moments, the new, rich, glorious history of yours begins. The whole world watches your steps into a new life, your entry into the promised land. Keep the shield clean as it was retained by your national army: the Czechoslovak Legion. " The statement also emphasized the peace and order because the representatives of the new state feared patriotic passions: "Our liberators, Masaryk and Wilson, must not be disappointed in their belief that they have conquered the freedom of the people who can rule themselves, the only disturbing act must not be inflicted upon by the great moments of the present, not one of you must commit anything that could cast the shadow on the pure name of the nation." These were the events in Bohemia but also in Slovakia. However this is the story of another ducat.

The author of the gold ducats miniseries is the talented medal maker Jiří Hanuš, DiS. The well-thought-out designs of individual mintages resemble the Foundation of Czechoslovakia in the painting process, where the artist repaints the old painting and uses the original surface to create something completely new. The first ducat of the miniseries was dedicated to the Washington Declaration. The artist painted the decor of the historical documentary and the rough outline of the future new state on a metaphorical canvas in the form of a Habsburg eagle. In the relief of the second ducat, which commemorates the proclamation of independence of the republic, the monarchy was completely destroyed and replaced by a map of post-war Europe with the dominant Czechoslovakia. In the relief of the third ducat, there is a two-tailed lion, first in the form of the monarchy (the obverse side), then in the form of the provisional state emblem of Czechoslovakia (the reverse side).

The unusual "painting process" will continue on the other two ducats. You can save the complete series in a wooden collector's etui.
Related products