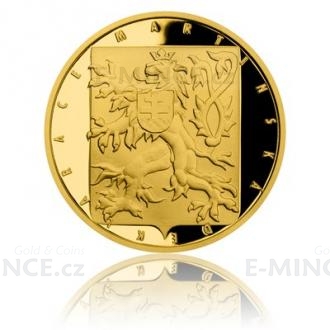 The miniseries of the Czech Mint "Establishment of Czechoslovakia", which commemorates the crucial moments leading to our independence, goes to Slovakia and Washington after Prague. The fourth of the five gold ducats is dedicated to the Martin Declaration.

If the Czechs were oppressed in Austria and vainly demanded their own state, then the position of the Slovaks in Hungary was still significantly worse. The inhabitants of Slovakia who were called the "Hungarian County", have been consistently denied the slightest right to national self-determination. It is no wonder, therefore, that the Slovaks at home and abroad have, since the very beginning, vehemently supported Czech efforts to break the monarchy and establish a democratic state - both on the battlefield and in the political field. The common czech-slovak ideas, ideas, desires and demands were formulated first in the Pittsburgh Agreement, then in the Washington Declaration, and finally in proclaiming an independent Czechoslovakia under the St. Wenceslas Memorial in Prague. However, what had been agreed by compatriots outside the borders of Slovakia was to be confirmed at home. Representatives of all Slovak political parties met in Turciansky Saint Martin on October 30, and unanimously voted the Declaration of the Slovak Nation, which entered history as Martin Declaration. The Declaration, which was founded by the Slovak National Council founded by Matus Dula during the First World War, expressed the will of the Slovaks to live in a common state with the fraternal Czech nation, refused to join Slovakia with Hungary and called for the end of the World War. There is no need to add that the Slovak public has enthusiastically accepted the message of the end of the centuries-old Hungarian oppression. The war was over and the Czechoslovak Republic was established. However, the story of its emergence has not yet come to an end. However another ducat tells its story..

The author of the entire gold ducats miniseries is the talented medalmaker Jiri Hanus, DiS. The well-thought-out designs of individual mintages compare the Foundation of Czechoslovakia with the painting process, when the artist repaints the old painting and uses the original surface to create something completely new. The first ducat of the miniseries was dedicated to the Washington Declaration, when the artist painted the decor of the historical document and the rough outline of the future new state on a metaphorical canvas in the form of a Habsburg eagle. The monarchy emblem was completely destroyed and replaced by a map of post-war Europe with the dominant Czechoslovakia on the relief of the second ducat that commemorates the proclamation of independence of the republic. A two-tailed lion in the form of the monarchy appeared on the relief of the third ducat on this map, which turned into a provisional state emblem of Czechoslovakia. This feature continues to be evolved on the ducat dedicated to the Martin Declaration. On the chest of the lion there was a hole, through which the text of the Slovak declaration (the obverse side) flashes, and a Slovak label (the reverse side) fits into this opening. The emblem of the new republic is complete.

The unusual "painting process" will be completed on the last ducat that reveals the "painter". You will then be able to save the complete five-part collection in a wooden collector's etui.