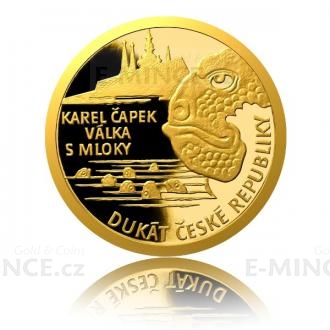 Gold Ducat is the smallest issue of the Ducat series. In 2017 it is dedicated to the works of art of the First Republic, whose literature represents Karel Čapek and his novel War with the Newts.

"Literature of the First Republic had a wide range of genres and forms. Besides the poets and novelists, focused on the European literary avant-garde, Karel Čapek occupies a specific position. His work is more than in our Surrealists and Dadaists associated with domestic literary tradition. In doing so, it is not about its tame sequel, but a means of creative development of contemporary literature. Čapek was popular even beyond the borders. A great response had mainly his Science&Fiction work,"  says the academic sculptor Michal Vitanovský, who is the author of the visual image of this ducat and the whole Ducat series.

A prominent place among Čapek's sci-fi novels takes the dystopian War with the Newts from the year 1935. The adventure story begins with the discovery of giant newts and is changing rapidly in the allegory of arrogance and unwavering belief in the superiority. People, who abuse and enslave the newt race, foolishly believe, that anything, that they create, can be also controlled without problems - as well as their counterparts in the real world on the eve of the Second World War they are not able to realize the emerging danger.

The obverse side of the ducat belongs to the mysterious leader of the intelligent newts, who performs under the name Chief Salamander and his followers, who in accordance with the end of the book appeared in Prague's Vltava River. The composition is enhanced with the inscriptions KAREL ČAPEK, VÁLKA S MLOKY and DUKÁT ČESKÉ REPUBLIKY. /War with the newts and Ducat of the Czech Republic/

The reverse side of the ducat is common to the whole Ducat series - the symbols characterizing literature, film and drama, and architecture are complemented by text ČESKÁ KULTURA PRVNÍ REPUBLIKY /Czech culture of the First Republic/ and the year 2017.

Light of the world will see only 100 pieces of the gold ducats of the Czech Republic!