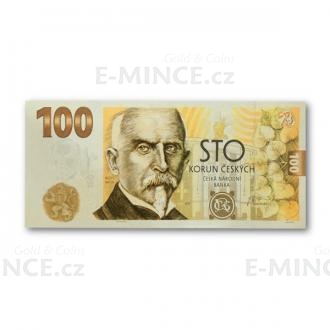 On 31 January 2019, the Czech National Bank is putting into circulation its first-ever commemorative banknote. The note has a nominal value of CZK 100 and is being issued to mark the 100th anniversary of the establishment of the Czechoslovak koruna. It is 84 mm wide and 194 mm long. Deviations of 1.5 mm in both width and length are acceptable. The banknote is printed on natural-coloured paper with a localised stepped watermark, a white line watermark and a windowed security thread. The stepped watermark is located in the 53 mm wide unprinted margin of the banknote (the coupon) and consists of a portrait of Alois Rašín. In addition to the stepped watermark featuring the portrait of Alois Rašín, a white line watermark consisting of the denomination “100” and a linden leaf with a linden fruit is located towards the centre of the banknote. The paper used to print the banknote includes visible orange protective fibres about 6 mm long. Offset-printed yellow circles are located in the coupon on both the face and reverse side. The banknote has a front-to-back register consisting of lines and areas on a linden leaf in the upper right-hand part of the print pattern on the face side and the upper left-hand part of the print pattern on the reverse side. Against the light, the lines and areas of the front-to-back register on the two sides of the banknote join to form the stylised letters “AR”.

On the face side of the banknote, the left-hand part of the print pattern features a portrait of the first Czechoslovak Minister of Finance Alois Rašín. The portrait is intaglio printed in brown. To the right of the portrait is the headquarters building of the Czech National Bank in Prague topped by a statue of the Genius with a Lion, which is offset printed in shades of yellow, orange and brown. In the lower part of the building is a round area printed in optically variable ink featuring the monogram of the Czechoslovak Republic “RČS” and linden leaves. The variable ink changes colour from green to goldish when tilted. Linden leaves intaglio printed in shades of brown are situated to the right of the building. Located near the lower margin of the banknote are the name of the designer “EVA HAŠKOVÁ INV.” on the left and the name of the engraver “MARTIN SRB SC.” on the right, intaglio printed in tiny brown letters. The right-hand part of the print pattern contains two lines of text describing the denomination “STO KORUN ČESKÝCH” and below it two lines with the name of the issuing bank “ČESKÁ NÁRODNÍ BANKA”. The area of the letters of the word “STO” is filled with the recurring microtext “STO”. To the right of the monogram are the designation of the issuing bank’s representative “GUVERNÉR” and a facsimile of his signature. The year of issue of the banknote “2019” is situated to the left of the monogram. In the strip near the right-hand edge of the banknote is the number “100” in negative and the recurring microtext “100”. All these texts are intaglio printed in dark brown. The underprint of the banknote is offset printed using a fine screen in shades of yellow and orange with the recurring microtext “ČNB 100”.

The denomination number “100” is intaglio printed in shades of yellow and brown in the upper part of the coupon. The area of the numbers is filled with the recurring microtext “AR”. In a round area in the lower part of the coupon is the Czech heraldic lion bearing a shield with the coat-of-arms of Slovakia. A latent image showing a dark or light number “100” when tilted is located in the round area with the lion.

On the reverse side of the banknote, an allegorical head of the Republic with a hint of a Phrygian cap reproduced from the façade of the building of the State Printing Works of Securities in Prague is printed in the middle of the print pattern. Printed to the left of the portrait is the façade of the Schebek Palace in Prague, the former headquarters of the Banking Office of the Ministry of Finance and the National Bank of Czechoslovakia. The head is partially covered from the right-hand side with a laurel twig. Located below the twig is the large coat-of-arms of the Czech Republic. The text “1919” and “2019” is situated below the head. The façade of the Schebek Palace, the portrait, the contour of the laurel twig and the coat-of-arms are intaglio printed in shades of grey and brown. In the strip near the left-hand edge of the banknote is the number “100” in negative and the recurring microtext “100”. The inscription “PADĚLÁNÍ BANKOVEK SE TRESTÁ PODLE ZÁKONA” is situated below, running parallel to the lower edge of the banknote. Printed in tiny letters near the lower edge of the banknote are the inscription “© ČESKÁ NÁRODNÍ BANKA” on the left, “STÁTNÍ TISKÁRNA CENIN, STÁTNÍ PODNIK, PRAHA” in the middle and the name of the engraver “MARTIN SRB SC.” on the right. Wavy screen strips with recurring positive and negative microtext with the names of the central bank’s representatives between 1919 and 2019 are located near the lower and right-hand edge of the print pattern. All these parts of the print pattern and the fill of the intaglio-printed contours are offset printed in shades of yellow, orange, grey and brown.

The denomination number “100” is offset printed in shades of grey, yellow and orange in the upper part of the coupon. The area of the numbers is filled using a fine screen in the upper part and with the recurring microtext “100” in the lower part. The underprint of the banknote is offset printed using a fine screen in shades of yellow, orange and grey with the recurring microtext “ČNB 100” and “1919” “2019”.