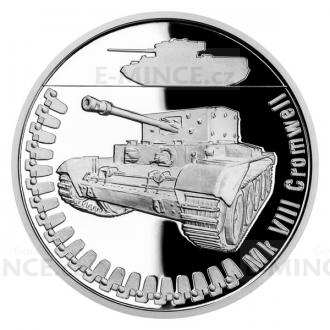 The first silver coin of the Czech Mint from the series Armoured Technology commemorates the British tank Mk VIII Cromwell, which served during the Second World War.

At the beginning of World War II, the British stuck to their concept of cruiser tanks. This type of armored equipment, which was characterized by high mobility, was designed to outflank the enemy, conduct surprise raids, and conduct reconnaissance. Cruiser tanks relied on speed, which went hand in hand with light weight, and therefore possessed only thin armour and weak armament. However, the disastrous defeat in France and the dismal fighting in North Africa led the British General Staff to the bitter realisation that their ideas were wrong, as high speed could not compensate for inadequate defensive and offensive capability. Without a means by which to counter the constantly upgraded German tanks and self-propelled guns, the British Army raised the demand for the development of a competitive vehicle that could stand up to the modern battlefield. The new machine - referred to as a heavy cruiser tank - was named the Cromwell and gave British tankers the opportunity to be equal opponents of the Germans. With its armour and firepower, it could match medium tanks, but at the same time remained agile. It was even the fastest British tank of the war years.

The reverse side of the commemorative coin, which is the work of medal maker Luboš Charvát, presents two depictions of the British tank - the three-quarter view is accompanied by a side silhouette. An inscription of the Mk VIII Cromwell and a detail of the tank belt complete the composition. The stripes can also be found on the obverse side of the coin, which is common to the entire tank series. As the licence to issue commemorative coins of the Czech Mint is granted by the Pacific island of Niue, the obverse side bears its necessary attributes - the name and portrait of Queen Elizabeth II, the nominal value of 1 DOLLAR (NZD) and the year of issue 2022.

The coin is stored in a spectacular packaging in the form of a catalogue card full of period photographs, interesting facts and tactical data. Individual cards can be stored in a collector's binder.