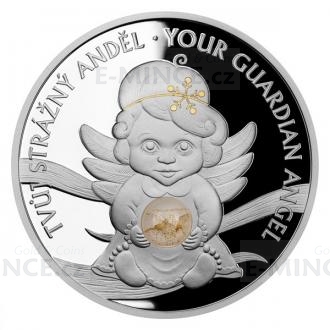 Crystal Coin
The unique silver coins with Czech crystal "Crystal Coin" are the result of a combination of traditional Jablonec crafts - the medal processing of the Czech Mint and the glassworks of the Preciosa company. The guardian angel has become a popular motif for these gift coins, therefore, it is coming out for the fourth time due to great interest. The new crystal stone commemorates the legend of Bethlehem light.

The most sacred places of Christians are cities connected with the life of Jesus Christ, and every believer wishes to see them with his or her own eyes. In the Middle Ages, the church was at the height of its power, but Bethlehem, where the Messiah was born, and Jerusalem, where he was crucified, were ruled by Muslim Turks. The Christian knights, who undertook a series of crusades, decided to change this. There was a young Florentine crusader who swore to bring home a flame of fire from the basilica of Bethlehem. Few people believed that he would fulfill his promise - most of the warriors died in the distant Holy Land…However, a group of knights arrived in Florence, led by a figure with a lighted candle at Christmas in 1099. Those men swore that the little flame that had ceased to travel in the desert and on the sea came from Bethlehem. People believed them and went to the candle to light their own Bethlehem light. This tradition has been preserved to this day…

The medal maker Irena Hradecká, DiS., placed the Bethlehem light in the form of a crystal stone into the hands of a guardian angel, to whom she attributed the cute appearance of a winged baby. The composition of the reverse side is supplemented with an Czech-English inscription "TVŮJ STRÁŽNÝ ANDĚL - YOUR GUARDIAN ANGEL". Since the coins of the Czech Mint are issued with a license of a foreign issuer, the island of Niue, the obverse side bears its necessary attributes – a nominal value of 2 DOLLARS (NZD), the name and portrait of Queen Elizabeth II. and the year of issue 2020.

The coin is issued as a limited edition of 1000 pieces and it is an original gift for many occasions. It is stored in an elegant packaging that you can easily turn into a practical frame. The coin also includes a multilingual certificate of authenticity, where you can write your dedication, and which is dominated by an English quotation written by the preacher Phil Bosmans and which can be translated as: "The angel is the one God sends to you unexpectedly and undesirably to light up a few stars when everything goes dark.“