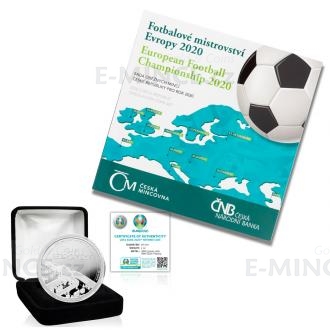 The Czech Mint and the Czech National Bank dedicated an extraordinary set of circulation coins with a sports theme to the European Football Championship in 2020, however, the Championship did not take place in the end.

The European Football Championship premiered in France in 1960. Since then it has been played every 4 years in various countries. The year 2020 was supposed to be an extraordinary year as the championship celebrates its 60th "birthday", its 16th year was to host the stadiums of twelve cities from all corners of Europe: Wembley Stadium (London, England), Allianz Arena (Munich, Germany), Stadio Olimpico (Rome, Italy), Olympic Stadium (Baku, Azerbaijan), Krestovsky Stadium (St. Petersburg, Russia), Puskás Arena (Budapest, Hungary), Arena Națională (Bucharest, Romania), Aviva Stadium (Dublin, Ireland), Parken Stadium ( Copenhagen, Denmark), Hampden Park (Glasgow, Scotland), San Mamés (Bilbao, Spain) and Johan Cruyff Arena (Amsterdam, The Netherlands). Unfortunately, this did not happen - the championship had to be canceled due to a coronavirus pandemic that afflicted the world at the beginning of 2020 and required strict quarantine measures. But fans don't have to be in despair - once the danger is over, the football elite will meet again…

The set includes six circulation coins with nominal values of 1, 2, 5, 10, 20 and 50 CZK which were minted in 2020 and did not go into circulation. A special commemorative token processed by medal maker Petr Patka, DiS is another piece of the puzzle. While the obverse side of the token presents a dynamic figure of a football player accompanied by a list of twelve host cities, the reverse side bears a soccer ball in which the names of all host countries are inscribed. Special attention is paid to London in England, where the final match was to take place, therefore, the reverse side is dominated by the iconic Big Ben. All this is stored in a special packaging that resembles the individual stadiums of the championship.

© The UEFA and EURO 2020 words, the UEFA EURO 2020™ Logo and Mascot and the UEFA European Football Championship Trophy are protected by trademarks and/or copyright of UEFA. All rights reserved. (source: MDM)