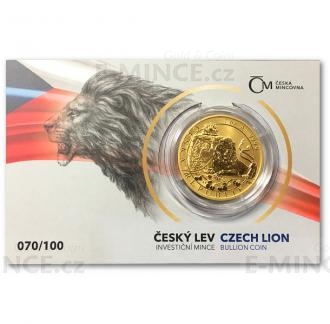 The "Czech Lion 2019", an investment coin embossed in the Czech Mint under a foreign license - numbered certificate/packaging, only 100

"The Czech Lion" met with extraordinary response not only at home, but also abroad. It joined the famous international counterparts (Austrian Philharmonics, American Eagles, Chinese Pandas) with great success. Even the largest internet distributor of precious metals requested to offer it and satisfied clients from the Czech Republic, the United States of America, Canada, China, Korea, Germany or Hungary added it to their portfolio. For example, the complete issue of silver ounce coins for 2017, which counts ten thousand pieces, was sold out almost immediately after the release. One troy ounce (31.1034768 grams) is the world's most popular investment weight. What is more, the "Czech Lion" was embossed from a troy ounce of pure gold besides the silver ounce variant in 2018. The patriotic reverse side of the investment coin is dominated by traditional Czech symbols, which are the two-tailed lion, the St. Wenceslas crown and the flaming St. Wenceslas eagle. The obverse side of the coin bears the linden branch, together with the attributes of the Niue Island, which provides the Czech Mint with a foreign license to coin its own coins. These are the name and portrait of the Emperor Elizabeth II, the year of the issue 2019 and the nominal value of 50 DOLLARS (NZD). The sophisticated drawing of the coin was created by the leading artist Jaroslav Bejvl. However, he died at the age of 75 even before he finished his work. Thus the medal maker Asamat Baltaev, DiS continued on the relief work.
Why is the Czech Lion coin exceptional?
Related products