You are here:Home»Czech & Slovak»Slovak Silver Coins»2018 - Slovakia 10 € 200th Anniversary of the First Steamer on the Danube River in Bratislava- Proof 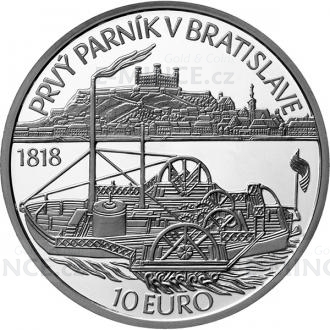 In the nineteenth century, the age of steam, the development of steamboat transportation was seen also in the Austro-Hungarian Empire. The first time a steamer sailed on the Danube River was in 1817. The Carolina, as she was named, was a wooden paddle steamer built by Antal Bernhard (1779–1830) in Vienna. Measuring 15 metres long, 3.5 metres wide and 2.3 metres freeboard, and generating 24 horsepower, the Carolina was able to haul a load of 45 tonnes upstream. She was tested over a longer distance on 2 September 1818, travelling in three hours from Vienna to Bratislava and mooring on the quay near Coronation Mound (now Ľudovít Štúr Square). The next day, according to the Pressburger Zeitung newspaper, the Carolina put on a demonstration for curious onlookers by turning upstream and downstream several times, before moving on downriver to Pest. She sailed upriver from Pest for the first time on 16 September 1818 and, travelling only by day, reached Komárno on 26 September 1818.

The coin’s obverse design portrays technical parts of the Carolina, which in 1818 became the first steamboat to sail to Bratislava on the Danube. Slovakia’s coat of arms is situated on the left side, below the name of the issuing country ‘SLOVENSKO’. The year of issuance ‘2018’ is shown at the bottom of the coin. In the upper right of the design are the mint mark of the Kremnica Mint (consisting of the letters ‘MK’ between two dies) and the stylised letters ‘ZF’, the initials of the coin’s designer Zbyněk Fojtů.

The reverse depicts the Carolina with a view of Bratislava in the background. At the bottom of the design is the coin’s denomination and currency ‘10 EURO’, and at the top is the inscription ‘PRVÝ PARNÍK V BRATISLAVE’ (THE FIRST STEAMER IN BRATISLAVA) in semi-circle. At the left side is the year ‘1818’, when the Carolina made her maiden journey.