You are here:Home»Czech & Slovak»Slovak Silver Coins»2018 - Slovakia 10 € 1150th Anniversary of the Recognition of the Slavonic Liturgical Language - UNC 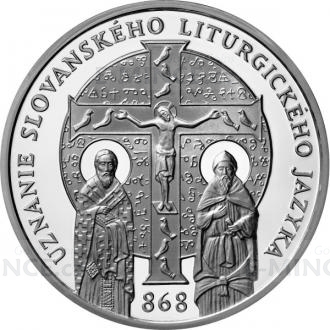 1150th anniversary of the recognition of the Slavonic liturgical language

The arrival of the Thessalonian brothers Constantine (later Cyril) and Methodius to Great Moravia in 863 is among the most significant events in Slovak history. The two missionaries understood that a nation's stature was determined by its culture and education. Hence in their missionary activity they taught and wrote in the vernacular Slavonic and translated the scriptures and liturgy into the language. In 867, at the invitation of Pope Nicholas I, they went to Rome to seek the establishment of an independent ecclesiastical province in Great Moravia. En route they stopped at Venice, where Constantine defended the Slavonic liturgy before high-ranking clergy who insisted that only Latin, Greek and Hebrew could be liturgical languages. After arriving in Rome the two brothers were received by Pope Nicholas's successor, Pope Adrian II, who in February or March 868 approved their Slavonic versions of the liturgy and scripture and ordained Methodius and several of his and Constantine’s seminarians as priests and deacons. The pope's approval of the Slavonic liturgy and scripture represented the ultimate recognition that the brothers' work could have received in the then Christian Europe.

Obverse:
The coin’s obverse design, symbolising the beginnings of Christianity in what is now Slovakia, shows an image from a plaquette found in an archaeological excavation at Bojná in western Slovakia. This is superimposed on a Greek cross, the arms of which are visible between the image and the coin edges and are filled with letters from the Glagolitic alphabet. Slovakia’s coat of arms appears in the lower left, above year of issuance ‘2018’. Next to the lower-right edge of the design, in semi-circle, is the name of the issuing country ‘SLOVENSKO’. At the top, across the upper arm of the cross, is the coin’s denomination and currency ’10 EURO’. At the bottom, to the left of the lower arm of the cross, are the mint mark of the Kremnica Mint (consisting of the initials ‘MK’ between two dies) and the stylised letters ‘RL’, the initials of the coin’s designer, Roman Lugár.

Reverse:
The reverse depicts Cyril and Methodius below the arms of a crucifix. These elements are set against a circle in which Glagolitic letters are interspersed. In semi-circle along the edge of the design, from the lower left to the lower right, is the inscription ‘UZNANIE SLOVANSKÉHO LITURGICKÉHO JAZYKA’ (‘Recognition of the Slavonic liturgical language’). The year ‘868’appears at the bottom, below the crucifix.