You are here:Home»Czech & Slovak»Slovak Silver Coins»2018 - Slovakia 10 € 100th Anniversary of the Establishment of the Czechoslovak Republic - UNC 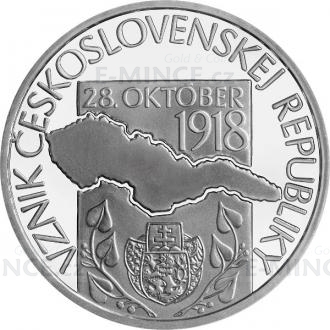 The independence of Czechoslovakia was proclaimed in Prague on 28 October 1918. Two days later, on 30 October 1918, Slovak leaders re-established the Slovak National Council in Martin and issued a declaration expressing their intention to be part of the new country. The Czechoslovak Republic came into being thanks largely to leading Czech and Slovak political dissidents, at home and abroad, and their activities in the Czech and Slovak lands during the First World War. The key figures were Tomáš Garrigue Masaryk, who became the country’s first president, and his two closest collaborators, Milan Ratistlav Štefánik and Edvard Beneš. The establishment of the Czechoslovak Republic is one of the most significant milestones in Slovakia’s history. After decades of subjugation within Hungary, Slovaks had the opportunity to fully develop their nationhood, which eventually enabled them to become a modern European nation.

Obverse:
The coin’s obverse design depicts the middle coat of arms of the Czechoslovak Republic. In the foreground on the left is the coat of arms of Slovakia, and in the foreground on the right is the coin’s denomination and currency ‘10 EURO’. The year of issuance ‘2018’ and the name of the issuing country ‘SLOVENSKO’ appear in the upper part of the design, one above the other. At the bottom are the mint mark of the Kremnica Mint (Mincovňa Kremnica), consisting of the letters ‘MK’ placed between two dies, and the stylised letters ‘ZF’, the initials of the designer, Zbyněk Fojtů.