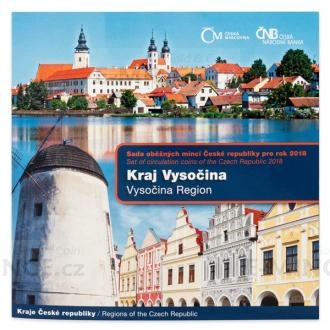 Set of 2018 Czech circulation coins dedicated to the Vysocina Region

The coins at denominations of CZK 1, 2, 5, 10, 20 and 50, along with an original token bearing the motif of Czech motives, are sealed in a square lacquered carton folder.

The tenth addition to the collector's series of regional sets of circulation coins prepared by the Czech Mint in cooperation with the Czech National Bank is dedicated to the Vysočina region in 2018.

The Vysočina Region extends in the middle of the Czech Republic, on the border of Bohemia and Moravia, and some sources even call it the geographical center of Europe. Besides the unspoiled nature, the Vysočina region is rich with various architectural monuments, of which three - the historical core of Telč, the Church of St. John of Nepomuk on the Green Mountain and the Třebíč Jewish Quarter with the Basilica of St. Prokop are listed on the UNESCO World Heritage List. These three unique, unparalleled world-famous pieces became the motive of the reverse side of the commemorative token, which is the work of the talented medal maker Petra Brodská, DiS. The obverse side of the token is dominated by Jihlava's Gate of the Mother of God, which is the medieval dominator of the capital of the region. Of course, the circulation coins can not miss six metallic coins with nominal values ​​of 1, 2, 5, 10, 20 and 50 CZK, which were coined in 2018 and never circulated. All this is stored in a thematic packaging in the form of a czech-english booklet, which reminds both the word and the picture of the interesting landmarks of the region.