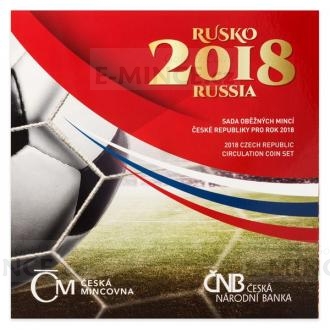 The coins at denominations of CZK 1, 2, 5, 10, 20 and 50, along with an original token bearing the motif of Czech motives, are sealed in a square lacquered carton folder.

The special edition of the circulation coin set with the year 2018, prepared by the Czech Mint in cooperation with the Czech National Bank, was launched on the occasion of Football World Championship held in Russia.

For the largest land of the world and even for Eastern Europe it is the first time that it has the opportunity to host this prestigious contest. A football elite from thirty-two national teams will measure their strengths at twelve stadiums in eleven Russian cities spread across an incredible area. Football enthusiasts and their fans will visit the arenas in Moscow, St. Petersburg, Kaliningrad, Nizhny Novgorod, Saransk, Volgograd, Rostov on Don, Sochi, Kazan, Samara and Ekaterinburg on the borders of Europe and Asia. The championship does not have a "death squad" this time and offers an interesting opportunity to compare where football is played on different continents. The set contains six circulation coins with nominal values ​​of 1, 2, 5, 10, 20 and 50 CZK which were embossed in 2018 and did not pass through circulation. Another work of the puzzle is a special commemorative token from the Mgr. Petr Horák, who is a medal maker specialized in sporting themes. The obverse side of the token is presented by a dynamically styled footballer, supplemented by the English inscription RUSSIA 2018. The reverse side is then dedicated to the flying ball, the Russian tricolor, the Moscow panorama of the temple Vasil Blažený and the inscription RUSKO. All of this is packed in a Russian style packaging that includes an overview of all the stadiums of the championship.