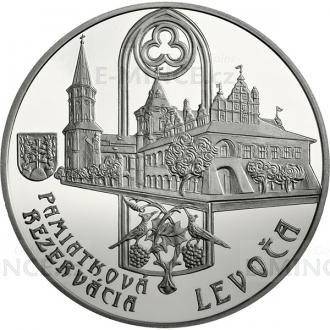 The town of Levoča grew up at an intersection of trade routes below the Levoča Mountains in eastern Slovakia. Along with Spiš Castle and surrounding historical landmarks, the national heritage site in Levoča forms a well-preserved legacy of medieval settlement, the like of which is found nowhere else in the world. For this reason, it was inscribed on the UNESCO World Heritage List. Evidence of the town's wealth in the Middle Ages is provided by its buildings and fortification system dating from 13th to 15th centuries. The main square, originally surrounded by houses of leading townsmen, gradually came to be filled with public buildings. In the 14th century, St James's Church was built in the middle of the square and the Town Hall was built to the south of the church. The renowned woodcarver Master Paul lived and worked in Levoča and his workshop produced many masterpieces. Among them was the main altarpiece in St James's Church – the highest late-Gothic winged altarpiece in the world, carved between 1507 and 1517. The town's fortified medieval core is home to many unique heritage structures, and in 1955 it was declared a national heritage site.

The obverse depicts the three central figures of the high altarpiece in St James's Church, Levoča, only here they are shown partly finished, as if emerging from blocks of wood. The wooden block of the right-hand figure bears the coat of arms of the Slovak Republic. The block of the central figure is inscribed, on separate lines, with the year of issuance “2017”, the denomination “20”, and the currency “EURO”. Below them are the mint mark of the Kremnica Mint “MK” and the stylised initials “PK”, the initials of the designer Pavel Károly. The wooden block of the left-hand figure is inscribed with “1517”, the year when the high altarpiece was completed, and, below that, the signature mark of Master Paul. The name of the issuing country “SLOVENSKO” runs along the lower edge of the central field.

The reverse features part of St James's Church (including the steeple) and the Old Town Hall. The composition is set in front of a Gothic window, below a trefoil at the top of the window and above altar decorations at the bottom of the window. To the left of the composition is the coat of arms of Levoča. Inscribed above the lower edge of the central field, on two lines at left, are the words “PAMIATKOVÁ REZERVÁCIA” (Heritage Site), and, at right, the town name “LEVOČA”.