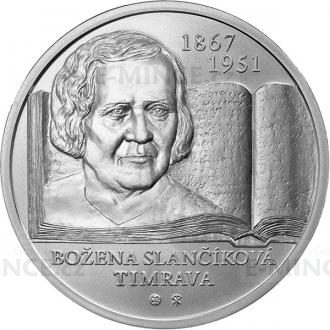 The obverse side of the coin depicts an open book with a motif from Timrava's well-known short story The Ťapáks. Overlying the book is a quill. In the lower part of the coin is the coat of arms of the Slovak Republic, and next to that is the name of the issuing country 'SLOVENSKO', above the year of issuance '2017'. The denomination '10 EURO' appears in the upper part of the coin.

The reverse features a portrait of Božena Slančíková Timrava set against the page of an open book. Her first and last names 'BOŽENA SLANČÍKOVÁ' are written below the book, and below them is her pseudonym 'TIMRAVA'. At the bottom of the coin is the mint mark of the Kremnica Mint and the initials of the designer Asamat Baltaev. The dates of Slančíková Timrava's birth and death, '1867' and '1951', appear in the upper part of the coin on two lines.