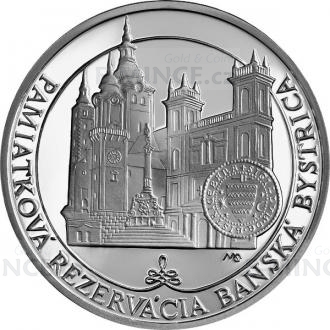 Banská Bystrica, the regional capital of central Slovakia, lies in the Zvolen Basin below Urpín Hill in the valley of the Hron River. In 1255 King Béla IV conferred on it the rank of 'royal free town'. Over time Banská Bystrica became a leading mining town, based mainly on the mining of silver and copper. The local Thurzo-Fugger company was one of the world's major producers of copper. As the mines prospered in the 15th and 16th centuries, so the town underwent a construction boom. The Church of the Assumption of the Virgin Mary was completely renovated, the Matthias House was built, and the Town Castle site was fortified. Civic administration buildings and impressive town houses were erected. The mining industry continued to thrive in the 17th century, as is evident from the Renaissance-style alterations made to houses in the main square. In the rebuilding work that followed the great fire of 1761, Baroque elements were a prominent feature. Mining gradually declined, and the 19th century saw craft industries become increasingly important. The centre of the town contains many historical buildings and structures, and in recognition of this fact it was declared an Urban Heritage Area in 1955.

Obverse:
The obverse side of the coin shows the Renaissance front façade of Benický’s House in the background with the Holy Cross Church built out of the Scribes’ Bastion which is part of the defensive system of the Banská Bystrica town castle. In the lower part of the coin, completing the composition is an ornamental element. The national coat of arms of the Slovak Republic is positioned on the left side of the coin. Along its lower edge is a circular inscription of the country designation “SLOVENSKO” and the year 2016. In the upper-right part of the coin there is the denomination “20 EURO” and in the lower-right part is the mintmark of the Kremnica Mint.

Reverse:
The reverse side of the coin depicts the most outstanding architectural monuments of Banská Bystrica – the Parish Church of the Assumption of Virgin Mary, the Clock Tower, the tower of the barbican, and St Francis Xavier’s Church, with the Baroque Marian column in the foreground. The composition is completed by the oldest known seal of Banská Bystrica, which represents the mining tradition of the town, and by an ornamental element along the edge. Also along the edge are the words “PAMIATKOVÁ REZERVÁCIA BANSKÁ BYSTRICA” (“Historical Preservation Area of Banská Bystrica”). In the lower-right part are the stylised letters “MG”, the initials of the coin’s designer Michal Gavula.