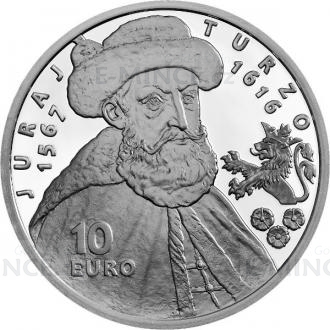 Juraj Thurzo – the 400th Anniversary of his Death

Juraj Thurzo (2. 9. 1567 – 24. 12. 1616), a statesman, diplomat, leader in the war with the Ottomans, man of learning and patron of culture and religion, was one of the most powerful magnates in Hungary at the turn of the 16th and the 17th centuries. He was the hereditary district governor of Orava County and the owner of the Orava, Lietava, Bytča and Tokaj estates. As a soldier, he fought in numerous battles with the Ottomans, but he also took part in diplomatic missions and served as a counsellor to Rudolph II, the Holy Roman Emperor. In 1609 he was elected Palatine of Hungary, which was the highest secular office in the Kingdom of Hungary. All his life he supported education and the Lutheran faith. He lived mainly at Bytča, where he completed the reconstruction of the manor-house, and built the Wedding Palace, a church and other buildings in the town. He also endowed a local school, which provided a high standard of education. Thurzo also supported the publication of books and other printed works. In 1610, a synod met in Žilina under his patronage, which laid the basis for the organisation of the Lutheran Church in Upper Hungary.