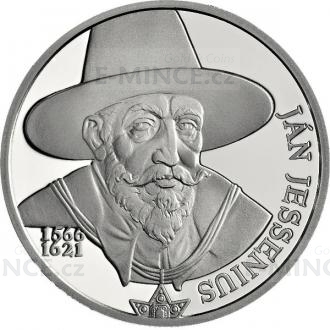 Ján Jessenius – the 450th anniversary of the birth

Ján Jessenius (27. 12. 1566 – 21. 6. 1621), a physician, scientist, and rector of Charles University in Prague, was one of the pioneering scientists of the late 16th and early 17th centuries. He was the author of numerous, for his era extraordinarily innovative, works in the field of medicine and is considered to be one of the founders of anatomy. In 1600, he performed the first public autopsy in Prague, which he reported on in his publications and lectures. His anatomy lessons were famous and considered very progressive. Jesenius is the author of significant works on the science of bones, blood and surgery, but he also wrote and published philosophical, historical and religious works. He entered politics as a supporter of the Bohemian estates opposing the centralisation of church and state power in the Holy Roman Empire. He became one of the leaders of the Bohemian revolt against Habsburg rule. In 1621, after the estates had been defeated at the Battle of White Mountain, Jesenius was accused of rebellion and lese-majesty and sentenced to death. He was executed along with twenty-six other leaders of the Bohemian estates on the Old Town Square in Prague.

The obverse of the coin shows a dramatic rendering of Jessenius performing the first public autopsy in Prague in 1600, with a silhouette of the Church of Our Lady before Týn in the background. In the upper part is the coat of arms of the Slovak Republic. To its right appears the country name SLOVENSKO. Under the coat of arms is the denomination 10 EURO in two lines. At the bottom edge is the year 2016. To the lower left is the mint mark of the Kremnica Mint MK and the stylised letters MP representing the initials of the designer, Mária Poldaufová.

The reverse of the coin shows a portrait of Ján Jessenius. To its right appears his name and surname and to the left side, in two rows, are dates of his birth and death 1566 and 1627.