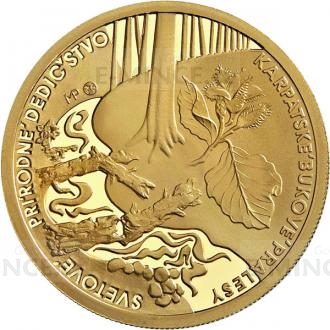 Obverse:
Prominent on the obverse of the coin, in a circular frame, is rosalia longicorn , one of the characteristic species of the Carpathian primeval beech forests. In the upper part of the coin field are flowers and leaves of Carpathian toothwort. Close to the upper edge is the coat of arms of the Slovak Republic and below it the denomination and currency 100 EURO. The name of issuing country SLOVENSKO is inscribed in the lower part. To the left of the beetle is the year 2015.

Reverse:
The reverse shows the primeval beech forest habitat with leaves and nuts of the European beech to their right. Along the left-hand edge runs the inscription SVETOVÉ PRÍRODNÉ DEDIČSTVO (World Natural Heritage) and opposite to it, along the right-hand edge, is the text KARPATSKÉ BUKOVÉ PRALESY (Carpathian primeval beech forests). The stylized initials of the coin designer Mária Poldaufová MP and the Kremnica Mint Mark MK are placed in the upper left part of the coin.