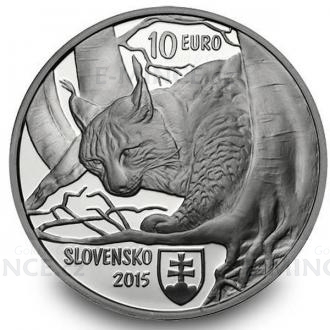 The obverse side of the coin depicts a Eurasian lynx in the setting of a primeval beech forest. At the bottom is the coat of arms of the Slovak Republic, and to the left of it is the name of the country Slovensko above the year 2015. The denomination 10 EURO appears at the top.

The reverse side shows dead trunks of European beech and silver fir trees, juxtaposed with another beech tree that has leaves and is bearing nuts. On the left side is the inscription SVETOVÉ PRÍRODNÉ DEDIČSTVO and KARPATSKÉ BUKOVÉ PRALESY. To the lower right is the mint mark of the Kremnica Mint and the stylized letters KL, the initials of the designer, Karol Ličko.