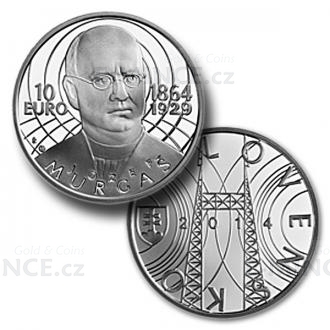 Jozef Murgaš (17 February 1864 – 11 May 1929) was a world-class scientist and inventor who played a pioneering role in the development of radiotelegraphy. During his work at Wilkes-Barre (Pennsylvania, USA) he acquired several invention patents, and in 1905 a company was established (in which he was a shareholder) to put them into practice. Murgaš used the company's funds to set up a laboratory and erect a trial transmission and reception station in Wilkes-Barre. The station made its first public transmission on 25 June 1905 and was able to transmit and receive radio signals from a distance of up to 35 km. This breakthrough in wireless transmission attracted huge attention. Murgaš was also a founding member of the Slovak League in America and co-authored its Memorandum. During the First World War he actively supported the creation of a common state for Czechs and Slovaks and the legal parity of Slovaks in that state.

The obverse side of the coin depicts the antenna mast that Murgaš used for his first successful radiotelegraphy transmission in Wilkes-Barre. The mast is accompanied by lines representing radio waves. Along the edge of the design is the name of the issuing country "SLOVENSKO". The issuing year "2014", appears in the centre, and the coat of arms of the Slovak Republic is on the left-hand side.

The reverse design features a portrait of Jozef Murgaš, which is set against a background of field lines shaped to represent a globe and by extension the global impact of his inventions. In the lower part is the name "JOZEF MURGAŠ" with the first name above the last name. To the left of the portrait is the denomination and currency, "10 EURO", and to the right are his years of birth and death, "1864" and "1929". On the left-hand edge of the design are the stylized initials of the designer, Ivan Řehák "IŘ", and the mint mark of the Kremnica Mint.