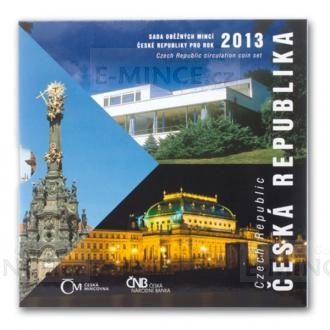 Set of 2013 circulation coins dedicated to the Czech Republic

The coins at denominations of CZK 1, 2, 5, 10, 20 and 50, along with an original token bearing the motif of the Old Town Square, are sealed in a square lacquered carton folder.

The set sleeve, the design of which is inspired by the Czech Republic flag, depicts major Czech cities listed by UNESCO among the World Heritage sites – Prague, Brno and Olomouc.

Inside the sleeve is a square folder containing photographs of other Czech monuments of global importance, such as the Pravčice rock gate, Ještěd mountain hotel, Kostnice underground chapel, Bouzov and Karlštejn castles, Sychrov and Hluboká chateaus, and other historical sites that make the Czech Republic an attractive tourist destination for visitors round the world.