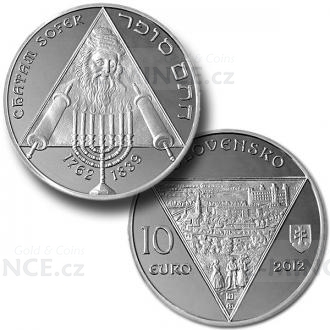 Chatam Sofer – the 250th Anniversary of the Birth

Chatam Sofer (24 September 1762 – 3 October 1839) was a distinguished Orthodox rabbi, teacher, judge and scholar. He acted as rabbi in several places. In 1806, he accepted position of the main rabbi of Pressburg (the then name of Bratislava), which he performed until his death. He is among the most leading authorities on the Jewish religious law and the representatives opposing the Reform movement. In this spirit, he also led the renowned yeshiva which belonged to the prominent centres of traditional rabbi education in Europe. He was also a respected rabbi judge. Chatam Sofer left a great amount of literary works. He is the author of numerous Torah and Talmud commentaries and he also wrote religious poetry. He was buried on the 17th-century Jewish cemetery of Bratislava, abolished during the 1940s, where only a few graves of the so called Rabbi section, including the Chatam Sofer’s grave, were left in their original location. In late 1990s, a monument was established at this place - The Chatam Sofer’s Memorial - where devout Jews from all around the world come to pray.

Description of the coin
Obverse:
On the obverse side of the coin the design is set in a triangular field and depicts a part of the townscape of Bratislava at the time of Chatam Sofer. To the left there is the denomination 10 EURO in two lines, and to the right the national emblem and the year 2012. The country name SLOVENSKO is written in the upper part. At the bottom of the townscape are the stylized initials of the coin‘s designer, Pavel Károly, and the mintmark of the Kremnica Mint.

Reverse:
The reverse side features a portrait of Chatam Sofer, again in a triangular field, together with a Torah scroll and a seven-branched candelabrum. the name CHATAM SOFER is written on the left-hand side and its Hebrew version on the right-hand side. The dates of his birth and death, 1762 and 1836, appear in the lower part of the field.