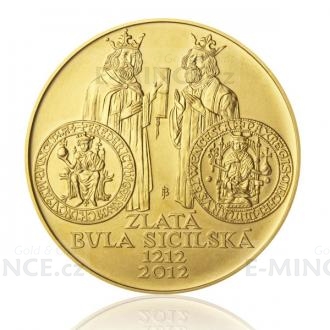 In 2012, the Czech National Bank has begun issuing extraordinary mintages of gold commemorative coins denominated 10,000 Czech crowns. The first coin commemorates the 800th anniversary of issue of the Golden Bull of Sicily. The design was chosen in a country-wide anonymous competition won by renowned creative artist Jaroslav Bejvl thanks to apposite representation of the theme and use of compelling historic attributes of the period.

Each of the 10,000-crown coins is made of fine 999.9 gold, weighs 31.1g and measures 34 mm in diameter. The coins are minted in two qualities – in standard quality the entire surface of the coin is polished, whereas proof quality coins have a polished mint field and a matted relief.

The obverse side of the coin is decorated with a composition of heraldic animals featured on the large state emblem in stylized Gothic shape and placed on shields – Czech lion, Silesian female eagle and Moravian female eagle. Below the composition of the heraldic animals there is the denomination of the coin and the currency “KČ 10 000“, as well as the name of state “ČESKÁ REPUBLIKA“. Below the text we can see the front side of the Sicilian seal of king Friedrich II and on the right the mintmark of Czech Mint.

The reverse side features a stylized depiction of the handing over of the Golden Bull of Sicily. The king of Germany (or king of the Romans) and Sicily Friedrich II (on the left) hands over the Golden Bull of Sicily to Czech king Ottokar I. In the lower part between the two monarchs we can see their royal seals. Below them the author of the design placed the text“ZLATÁ BULA SICILSKÁ“ (Golden Bull of Sicily) and years marking the anniversary “1212–2012“. Letters “J“ and “B“ – initials of the author of the coin design Jaroslav Bejvl –are showing between the two kings. (source and photo: http://www.ceskamincovna.cz/)