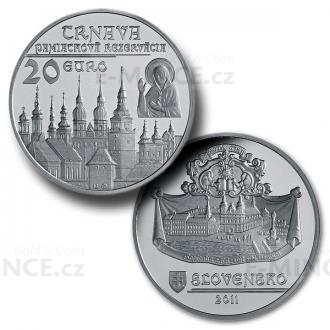 Trnava belongs to the most important towns in Slovakia. It features a rich history and many architectural treasures, foremost among which are valuable religious monuments. Historic buildings originate from older settlements located at the crossroads of ancient trade routes. The seat was first mentioned in 1211 in a deed of the Archbishop of Esztergom. The Hungarian king Bela IV granted this thriving market place the privileges of a free royal town in 1238, thanks to which Trnava is considered the oldest recorded royal town in Slovakia. In the 16th century, the town assumed the role of a religious and cultural centre of the country for 150 years, because the southern part of the Hungarian Kingdom was threatened and occupied by the Turks. In 1543, the Archbishop of Esztergom moved here and synods convened in the town. Owing to this and with its many churches, Trnava has been called the "Slovak Rome". Cardinal Peter Pázmány founded a university here in 1635 changing the town into a hub of the highest education. In 1987, Trnava's historic centre was declared a historical preservation area.

Obverse:
The obverse side of the coin shows the historical townscape of Trnava University and the University Cathedral of St John the Baptist. The state emblem of the Slovak Republic is in lower left part of the field, next to the country name SLOVENSKO. Below them are two horizontal lines and the year 2011.

Reverse:
The reverse side depicts Trnava's most significant architectural landmarks: the synagogue, the Church of St Anne, the Church of the Assumption of the Blessed Virgin Mary, the Church of St Jacob, the Basilica of St Nicholas, the Town Tower, the Church of the Holy Trinity, the Church of St Joseph, and the fortification tower. To the side of this scene is a depiction of the Virgin Mary of Trnava. In the upper part of the field are two lines of text, reading "TRNAVA PAMIATKOVÁ REZERVÁCIA" (Historical Preservation Area of Trnava), and below them are two horizontal lines and the nominal value of 20 EURO. The stylised initials of the coin's designer, Mgr. art. Roman Lugár and the mark of the Kremnica Mint are set in the steeple outline at the base of the coin.