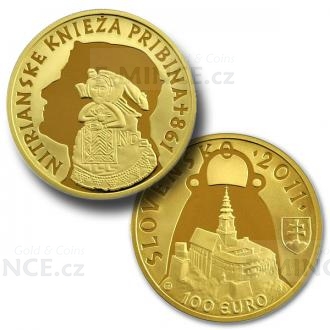 Prince Pribina – the 1150th anniversary of the death

Pribina came to the throne around the year 827 in Nitra, then called Nitrava. Though he was a pagan, he built a church for his wife in Nitra. The church was consecrated by Adalram, the Archbishop of Salzburg, in 828. Pribina was the Prince of Nitra only for about five or six years. In 833, Mojmír, the Prince of Moravia attacked him and attached the Principality of Nitra to his Principality of Moravia. Pribina sought refuge with Radbod – the Margrave of Eastern and Carinthian Marks. By order of the King Louis the German he was introduced to the faith and baptized in Saint Martin Church in Traismauer. Around the year 840, Louis the German separated Panonia from the big Carinthian Mark and granted it to Pribina, who became the Prince of Panonia. Blatnohrad (present Zalavár) became his new seat. In 861, Karolman, the son of Louis the German, revolted against his father in alliance with the Prince of Great Moravia Rastislav. The Moravians attacked Pribina, who remained loyal to the King. Pribina died in this fight and his son Koceľ became a new Prince of Panonia.

Obverse:
The obverse of the coin features a silhouetted outline of the bell from the archeological excavation site of Bojná and a centrally placed depiction of Nitra castle in its current form. On the left side of the design is the country name SLOVENSKO, and on the right side the year 2011, below which is the national emblem of the Slovak Republic. The denomination 100 EURO is on the lower part of the field. To the left of the denomination is the mark of the Kremnica Mint and to the right are the stylized initials of the coin’s designer, academic sculptor Ivan Řehák.

Reverse:
On the reverse of the coin there is an imagined portrait of Prince Pribina. The centre of the design depicts a fragment of the plaque found at Bojná. Near the edge of the coin is the inscription NITRIANSKE KNIEŽA PRIBINA (Pribina, Prince of Nitra) and the year of his death † 861.