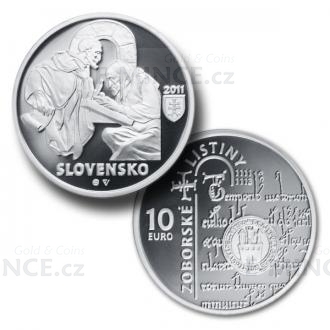 Dated from the years 1111 and 1113, the Zobor Deeds are the oldest preserved documentary originals in Slovakia. The Zobor Deed of 1111 is written on parchment, of dimensions 560x320 mm and it is almost undamaged. It is a sentencing document in the dispute between the Zobor abbot Gaufred and royal tax collectors, in regard to one-third of the toll fees in the castle district of Nitra and near the river Váh up to Trenčín, which were granted to the Zobor church by King Stephen I. More than twenty witnesses were present in this dispute, representatives of secular and religious institutions of Nitra.

The Zobor Deed of 1113 contains a list of properties of the Zobor abbey. It is preserved on a damaged, thick parchment, with dimensions of 460x620 mm, a part of which is missing. It mentions up to 200 local names, which are evidence of developed early medieval settlement, as well as the predominantly Slovak population of the respective territory at the beginning of the 12th century. No seals or signs of sealing were preserved on these documents. Both are currently deposited in the Episcopal archive of Nitra.

Obverse:
The obverse side of the coin depicts a pair of Benedictine monks writing the Deeds while sitting inside the monastery as the designer imagines it. On the right side of the coin, the national emblem of the Slovak Republic is situated below the year 2011. The state name SLOVENSKO appears in the lower part of the coin, above the mintmark of the Kremnica Mint MK and the stylized initials PV, standing for the first and last names of the designer, Mgr. art. Peter Valach.

Reverse:
On the reverse side, to the right, there is a depiction of a text fragment from the first Zobor Deed, complemented by the seal of the chapter of the Zobor Church of St Hippolyte. On the left side, alongside a line denoting a Romanesque arch, there is the inscription ZOBORSKÉ LISTINY (Zobor Deeds), followed by the years 1111 and 1113 in two lines. The nominal value 10 EURO is written in two lines on the left side of the coin.